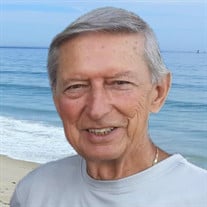 Seabrook, NH – Robert V. Pace Sr., 87, of Seabrook, passed away peacefully on Monday, November 9, 2020 surrounded by his loving family. He was born in Newburyport, MA June 3, 1933, a son of the late Isaia and Camilla (Macolato) Pace. Bob was predeceased by his beloved wife Mary L (Leslie) Pace who died on August 16, 2019. Bob grew up in Newburyport, MA and Haverhill, MA. He graduated from Northeastern University in 1956 with a Bachelor’s Degree in Business. He met the love of his life, Mary Leslie in 1955 and they were married on June 1, 1957. After college, Bob spent 3 years in the U.S. Navy as a Supply Officer. After the Navy, he became a CPA and worked as a public accountant with Arthur Young & Co for 10 years. He then joined Goodwin Law Firm of Boston, formerly Goodwin, Procter & Hoar as their Chief Financial Officer, retiring in 1999 after over 30 years of service. He was a member of the Massachusetts Society of CPAs, the American Institute of CPAs, and the American Legal Association. Bob and Mary spent their summers at Seabrook Beach before making Seabrook their permanent home in 1988. They traveled often and loved spending their winters in Naples, FL. Bob was a devoted husband, father and grandfather. He was also an avid sports fan who enjoyed following the fortunes of the Boston sports teams. Most of all, he was totally involved in the lives of his children. Whether coaching Little League or being there for other activities, he loved his children and grandchildren above all else. He is survived by sons, Robert Pace, Jr. and his wife Valerie of Hampton, NH and Richard Pace and his wife Frances of Windsor, CT, his daughter Ann Marie Pace and her husband William Sullivan of Scotts Valley, CA and his grandchildren, Michael and Christopher Pace, Thomas and Daniel Sullivan, Felicia Kubicki and Katelyn and Richard Ryan. He also leaves his sister, Dolores White of Newburyport, MA, and many nieces and nephews. In addition to Mary, he was predeceased by sisters, Frances Gouldthorpe, Gloria Gagalis, Norma Szymczycha and Theresa Tessimond. Visiting hours will be from 5 to 7 PM on Thursday, June 24, 2021 in the Remick & Gendron Funeral Home. A Mass of Christian Burial will be celebrated at 11 AM on Friday at St. Elizabeth's Church, 1 Chelmsford St., Seabrook Beach, NH. Burial will be private. Masks are required and social distancing must be maintained. In lieu of flowers, memorial donations may be made to the Boston University Alzheimers Disease Center 72 East Concord St. – Robinson 7800, Boston, MA 02118.

The family of Robert V. Pace Sr. created this Life Tributes page to make it easy to share your memories.

Send flowers to the Pace family.