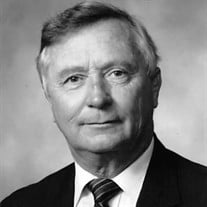 Hampton - Former Senator Robert F. Preston, 92, of Hampton passed away on Monday December 27, 2021 surrounded by family members. He was born on May 11, 1929 to Richard and Margaret (Burke) Preston in Lowell, Massachusetts where he attended Keith Academy. He moved to Hampton early in life and served for nearly two decades in the New Hampshire State Senate, eight years as the Democratic leader, and was a longstanding businessman on Hampton Beach alongside his beloved wife Charlotte. Robert, known as “Bob”, lost his father while still a child, leaving their mother to raise Bob and his brothers alone. Bob’s older brothers fought in WWII, and while Bob was too young to join while the war was going on, he convinced his mother to let him sign up for the US Army when he was still 17 years old, just in time to be sent to Italy following the war to repatriate German soldiers and help the Italian people rebuild their communities. He also later served again in Germany during the Korean War. Bob met his wife at Hampton Beach in the summer of 1948 when she was a clerk at the Donovan and Fallon Rexall drug store; while he was working as a dishwasher at Kelley’s Restaurant. Bob would often go down to the drug store and have a 10-cent Coca Cola at the soda fountain to get acquainted with Charlotte, and the two fell in love. He was honored when she asked him to take her to her senior prom and often said she was the “prettiest girl in Lawrence.” They were married October 4, 1952 and would be married for 63 years until her passing in 2016. Together they owned and operated numerous beach businesses, like Preston Fine Foods & Preston Real Estate. They were also involved in many fundraisers for charitable endeavors for the enrichment of Hampton and the Seacoast area. Their family was also heavily committed to the 100 Club of New Hampshire which provides assistance to families of fire and police personnel that lost their lives in the line of duty. Senator Bob, a Democrat, won his first senate seat in 1964 then served 18 consecutive years in the senate starting in 1972. During that time Bob became acquainted with presidents, vice presidents and presidential candidates, even attending inaugurations. Bob was also very proud of his work on the Pease Development Authority, created when the federal government shut down Pease Air Force Base. Bob, along with his PDA associates, oversaw the transformation of the former base into an economic engine for the Seacoast area, adding hundreds of companies and thousands of employees. Bob leaves behind his five children, Bob Preston and fiancé Angela Anderson of Hampton, Charlie Preston and partner Susanne Kolosey, Martha Preston and partner Paul Himmer of Seabrook Beach, Jimi Preston of Seabrook Beach, Maryrae Preston and her husband, Kevin Reusch of Hampton Beach along with many grandchildren and great grandchildren. He also leaves behind his brother John Preston of Stratham. In addition to his parents Bob was predeceased by his loving wife Charlotte (Keefe) Preston, his brothers Richard and Russell Preston, and his daughter-in-law Heather Preston. A Mass of Christian Burial will be celebrated at 11 AM on Friday, December 31, 2021 at Our Lady of Miraculous Medal Church, 289 Lafayette Road, Hampton, NH. The Mass will be livestreamed starting at 11 AM, by visiting OLMM Livestream. A celebration of Bob’s life will be in the spring; please check the funeral home website for date and time. In lieu of flowers, memorial contributions may be made to either, Experience Hampton, PO Box 444 , Hampton, NH 03842 or the Hampton Beach Village District for playground improvements, PO Box 1472, Hampton, NH 03843-1472 or Hampton Historical Society, 40 Park Ave, Hampton, NH 03842.

Hampton - Former Senator Robert F. Preston, 92, of Hampton passed away on Monday December 27, 2021 surrounded by family members. He was born on May 11, 1929 to Richard and Margaret (Burke) Preston in Lowell, Massachusetts where he attended Keith... View Obituary & Service Information

The family of NH Senator Robert F. Preston created this Life Tributes page to make it easy to share your memories.