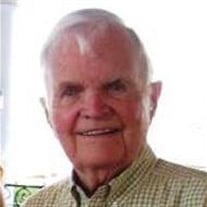 Hampton – Robert Lyle Salmon, 88, of Hampton and a former longtime resident of York, ME, and Boxford, MA passed away peacefully after a brief illness, at his home on Wednesday, August 23, 2017, surrounded by his loving family. Robert was born in Madison, Wisconsin, son of the late Lyle and Nina (Melgard) Salmon. He was raised in Sparta, Wisconsin and graduated from Sparta High School with the Class of 1947. Duty called and Bob left the University of Wisconsin and enlisted in the United States Air Force. He earned his commission and flew the Curtiss C-46 Commando during the Korean War, carrying soldiers to and from the conflict. He left active duty as a 1st LT and remained with the Wisconsin Air National Guard until he began his flying career with American Airlines. Bob flew for American Airlines for over 30 years, retiring as a senior captain flying international routes. For many years, Bob and Jeanne traveled with their 5 children on fascinating vacations, often not really knowing where they may end up due to the vagaries of flying stand-by. Pack clothes for warm weather, head to Logan Airport, and see what flight had room for the 7 of us! It was great adventure and left his family with many cherished memories. Bob loved his children and grandchildren and enjoyed spending time with them. He frequented his grandchildren’s sporting events, rain or shine. Always a gracious host, he enjoyed celebrating the holidays with family and friends. He especially loved his wife Jeanne, and together they made friends easily wherever they went. Bob is survived by his wife of over 62 years, Jeanne (Doyle) Salmon of Hampton; his sons, Michael R. Salmon and his wife Catie of Gloucester, MA, David L. Salmon and his wife Dianne of Yarmouth, ME, and his daughters, Stephanie Stepanauskas and her husband Daniel of Silver Lake, NH, Melissa McBride and her husband Jack of Concord, MA,and Jane Diamond and her husband Terry Palison of Ft. Myers, FL. He also leaves his twelve treasured grandchildren and his many cherished friends. Bob will be sadly missed by all who knew and loved him. In addition to his parents, he was predeceased by his sister, Marianne Webster of Grays Lakes Illinois. Visiting hours will be from 5 to 7 PM on Wednesday, August 30, 2017 in the Remick & Gendron Funeral Home, 811 Lafayette Rd., Hampton. A Mass of Christian Burial will be celebrated at 11 AM on Thursday, August 31st at Our Lady of the Miraculous Medal Church, 289 Lafayette Rd., Hampton. Friends and family are respectfully invited. Burial will be private. In lieu of flowers, the family suggests memorial donations to the American Cancer Society.

Hampton &#8211; Robert Lyle Salmon, 88, of Hampton and a former longtime resident of York, ME, and Boxford, MA passed away peacefully after a brief illness, at his home on Wednesday, August 23, 2017, surrounded by his loving family. Robert... View Obituary & Service Information

The family of Robert Lyle Salmon created this Life Tributes page to make it easy to share your memories.

Hampton – Robert Lyle Salmon, 88, of Hampton and a former longtime...

Send flowers to the Salmon family.