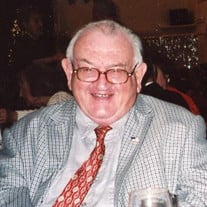 Ipswich, MA – Robert L. Sampson, 86, formerly of Ipswich, Mass., died Wednesday, April 13, 2016 at Colonial Poplin Nursing Home in Fremont, NH. He was born in Portland, ME April 9, 1930 a son of the late Lewis H. and Anna (Mulkern) Sampson. Raised in Portland, he graduated from Portland High School with the Class of 1948 and received his Bachelor degree from Gorham State Teachers College, Gorham, ME and his Masters degree from Salem State College in Salem, Mass. He was a member of the National Science Foundation at Ohio State University and was a veteran of the Korean Conflict serving with the US Navy. Mr. Sampson taught science at the elementary and high school level within the Gloucester school system for 35 years retiring in 1992. He moved to Ipswich in 2002 coming from Gloucester. He was a member of the National Science Teachers Association, Order of St. Luke the Physician, was active with the Boy Scouts of America for over 40 years and enjoyed fresh water fishing. He was the husband of the late Elizabeth B. “Betsy” Sampson who predeceased him in 2012. Family members include his son, Timothy B. Sampson and wife Nicole Legendre of Fremont, NH, three grandchildren, Micaela, Hannah and Jessica, his brother, Walter A. Sampson and wife Edna of Nordheim, TX, brother in law Irv Morris and wife Ellie of Simsbury, CT, his niece, Julia Morris Ogden and husband Stephen and two great nephews, Malcolm and Christopher. A graveside service will be held at 11 A.M. Saturday, April 23, 2016 in the West View Cemetery, Hampton Falls, NH. Relatives and friends are respectfully invited. In lieu of flowers, donations may be made to Most Holy Trinity Monastery, 67 Dugway Road, Petersham, MA 01366. Arrangements are by the Remick & Gendron Funeral Home-Crematory,

The family of Robert L. Sampson created this Life Tributes page to make it easy to share your memories.

Send flowers to the Sampson family.