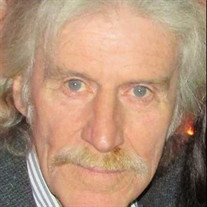 Seabrook, NH – Robert J. “Bob” Shea, 66, of Seabrook, died Thursday, October 31, 2019 at the Kaplan Hospice House in Danvers with family by his side after a lengthy battle with cancer. He was born in Boston, MA on June 29, 1953 a son of the late Chester V. Shea, II and Barbara A. (Boyle) Shea. Bob was raised in Peabody, MA and spent his childhood summers at his family vacation home in Dennis, MA. He attended grades K-8 at Saint John's Parochial School in Peabody, MA. He attended Saint Peter's Catholic High School in Gloucester, MA until it's closing in 1969, and graduated from Peabody High School in Peabody, MA in 1971. Bob concentrated on an Associate Degree in Business at North Shore Community College in 1978. He also earned his Real Estate License in Massachusetts in 1979. Bob was employed as a certified instructor in the boating division of Imtra Corp of New Bedford, MA, for many years. While at Imtra Corp, Bob was assigned to train U.S. Navy personnel on the use of inflatable life rafts, at U.S. Naval bases around the world. After retiring from Imtra Corp, Bob was self-employed, as the owner of B and B Construction Company of Salisbury, MA. His last 15 years of employment were spent working as a Department Supervisor, at the Home Depot in Saugus, MA and Seabrook, New Hampshire. He was also the co-owner with his wife Barbara of Shea's Shirts and Stuff in Rockport MA, and Barbara's Banner's Flag and Gift Shop in Salisbury, MA. Bob enjoyed vacationing on Cape Cod, RV camping, hunting trips, and "mystery rides" with his family. As a young man, Bob was an Altar Boy at Saint John's Church, a member of the CYO, and a Boy Scout in Peabody, MA. Bob was a Boy Scout Leader in Ipswich, MA, a member of the AOH Peabody, MA, a member of the Beverly, MA Chamber of Commerce, and a member of the Salisbury, MA Chamber of Commerce. He shared 29 years of marriage with his wife Barbara E. (Chapruet) Shea. In addition to his wife he leaves his 15 year old twin daughters, Kerrin and Meaghan Shea of Seabrook, a brother Chester V. Shea, III, and his wife Leann Shea of Leicester, MA, a sister Deborah Manning and her husband Richard Manning of Dennis, MA, a brother Gregory Shea and spouse Joanne Silva, of Hyannis, MA, a sister-in-law Donna Tosches and her husband Albert of Danvers, MA, a sister-in-law Lois Porter of Franklin, NH, and a brother-in-law Robert Chapruet and his wife Diane of Danvers, MA. He also leaves many nieces and nephews. Bob is predeceased by his son Robert J. Shea, Jr. Visiting hours will be from 5-7 P.M. Wednesday, November 6, 2019 at the Remick & Gendron Funeral Home-Crematory, 811 Lafayette Road, Hampton. Services will be held at 11 A.M. Thursday, November 7, 2019 in the funeral home. Relatives and friends are respectfully invited.

The family of Robert J. Shea created this Life Tributes page to make it easy to share your memories.

Send flowers to the Shea family.