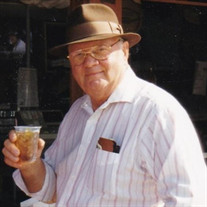 Hampstead – Robert R. “Bob” Thompson, Sr., 89, of Hampstead, formerly of Hampton, died Thursday, April 8, 2021 at his home with loving family by his side. He was born in Exeter February 25, 1932 the son of the late Ralph F. and Bernice (Woodburn) Thompson. Bob was raised in Hampton and at a young age worked on the former Marston Farm in Hampton Falls before working and learning the trade of brick masonry with William C. Carter. After 20 years with Carter he moved on and owned and operated his own masonry business for the following 20 years. He was extremely proud of his work and would often point out his work to his family and friends while driving in the seacoast area. He was a seasonal camper for over 40 years at Sunset Park in Hampstead and enjoyed his role of grounds keeping, maintenance, and other activities at the park. He loved sitting around campfires at night with people, riding his scooter, and visiting friends and campers. As captain of his pontoon boat, he enjoyed giving rides around the lake. He loved working in his shop, creating and building, listening to the radio, watching The Three Stooges and old time westerns. He made his home in Hampstead since 1997 coming from Hampton. He shared 20 years of marriage with his wife Mary Jane (O’Malley) Thompson. In addition to his wife, he leaves four children, Robin Brown and her husband Jesse of Seabrook, Robert Thompson, Jr. and his wife Deborah, Angelia Drake and her husband Richard all of Hampton, Julie Ann Thompson of Hampstead, his sister Mary Lou Couch of Portsmouth, 12 grandchildren, Michelle Cooper, Ann West, Robert Thompson, III, Justin Bishop, Katie Buchanan, Sara Martin, Kelly Averill, Dylan Drake, Hannah Armstrong, Elsie Thompson, Audrey and Alison Kaiser, 22 great grandchildren, nieces and nephews. He was predeceased by his sister, Joanne Mae Felix. Visiting hours will be from 5-7 P.M. Friday, April 16, 2021 at the Remick & Gendron Funeral Home-Crematory, 811 Lafayette Road, Hampton. Relatives and friends are respectfully invited. Services will be private.

The family of Robert R. Thompson, Sr. created this Life Tributes page to make it easy to share your memories.