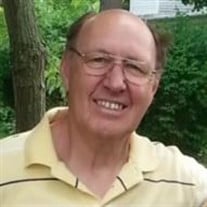 Hampton – Robert J. “Bob” Waldschlagel, 74, of Hampton, passed away Sunday, April 8, 2018 at Brigham & Women’s Hospital in Boston after a period of failing health with loving family by his side. He was born December 18, 1943 on Staten Island, NY, son of the late Alfred and Erma (Hermann) Waldschlagel. Bob was raised on Staten Island and graduated from Port Richmond High School. After graduation he enlisted in the Navy and served with the US Naval Air, stationed in Italy for four years. He was employed as an electrician in New York City for ten years before taking a position with ServiceMaster as a physical plant director. In 1991 he became a financial advisor for Thrivent Financial until his retirement in 2011. Family was most important and he adored his granddaughters. He was a member of Holy Trinity Lutheran Church in Newington, enjoyed his church family, cooking, gardening, and was a voracious reader. He made his home in Hampton since 1982. Bob shared 48 years of marriage with his loving wife Leah (Smith) Waldschlagel. In addition to his wife, he leaves his son, Matthew Waldschlagel of Worcester, MA, his daughter, Rebecca Murphy and her husband Linus and their children Molly and Emma of Newburyport, MA, his two sisters, Carol Klotz (Vern) of Lombard, IL and Laura Mohlenhoff (Hank) of Milford, NJ, and several nieces and nephews. Services will be held at 2 PM Friday, April 13, 2018 at Holy Trinity Lutheran Church, Newington. Relatives and friends are respectfully invited. In lieu of flowers, the family suggests donations to Holy Trinity Lutheran Church ,22 Fox Run Road, Newington, NH 03801 or to Public Broadcasting Service , 286 Mast Road, Durham, NH 03824. Assistance with the arrangements was by the Remick & Gendron Funeral Home-Crematory, Hampton.

The family of Robert J. Waldschlagel created this Life Tributes page to make it easy to share your memories.

Send flowers to the Waldschlagel family.