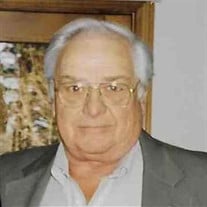 Hampton – Robert Weston Roberts, 83, of Hampton died Sunday, July 30, 2017. He was born May 18, 1934 in New Rochelle, NY, the son of the late Roland H. and Catherine (Twigg) Roberts. He was a graduate of Cambridge Academy, Cambridge, Mass. and from Northeastern University with a machine accounting degree. He later served with the US Coast Guard and with the US Army. Mr. Roberts was employed by Raytheon, Proctor and Gamble and IBM in his earlier years. He owned and operated Westgate Sunoco, Himmers Auto Salvage and R & P Wrecker Service. In later years he was employed in automobile sales at King Chevrolet, Gil’s Jeep and Wentworth Volvo. He retired in 1998. Wes lived in Medford, MA, before moving to Hampton in 1980. He enjoyed boating, lobster and tuna fishing, mooring his boat at the Hampton Marina and was a member of the Coast Guard Auxiliary. He was the husband of the late Roberta “Betty” (Gosselin) Roberts, who predeceased him in 2013. He was predeceased by his daughter, Debra Pinto in 2002. He leaves behind one stepson, Glenn Forsythe of Andover, Mass., three step daughters, Kate Portrie and husband Stephen of Hampton, Cindy Mulligan and Connie Ferguson of St. Cloud, Fla. He also leaves several grandchildren including Clifford Chapman, Ariana Harding, Heather Cammett, Olivia Forsythe, Jared Ferguson, Kacie Sabella, Torey Portrie-Bethke, Steve, Michael and Sarah Portrie. He also leaves behind his special companion, Verna Hartman and her family. Visiting hours will be from 5-7 P.M. Thursday, August 3, 2017 at the Remick & Gendron Funeral Home-Crematory, 811 Lafayette Road, Hampton. Services will immediately follow at 7 P.M. in the funeral home. Relatives and friends are respectfully invited. In lieu of flowers, donations may be made to Wounded Warrior Project, 150 Cambridge Park Drive, Suite 202, Cambridge, MA 02140 http://www.woundedwarriorproject.org/ or St. Jude Children’s Research Hospital, 501 St Jude Place Memphis, TN 38105 www.stjude.org/.

The family of Robert "Wes" Roberts created this Life Tributes page to make it easy to share your memories.

Send flowers to the Roberts family.