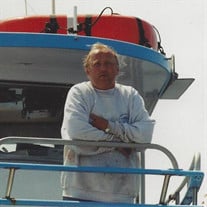 Seabrook – Gregory A. “Rocky” Gauron, 66, of Seabrook and a former longtime resident of Hampton, passed away peacefully at Massachusetts General Hospital on Sunday, December 11, 2016 surrounded by his devoted family. He was born in Exeter on October 10, 1950, a son of the late Alfred and Alice (Semacko) Gauron. Rocky was raised in Hampton and graduated from Winnacunnet High School with the Class of 1968. Starting at an early age, Rocky worked the family fishing fleet from Hampton Harbor. He started as a mate, then Captain and eventually owner of Al Gauron’s Deep Sea Fishing and Whale Watching. He loved fishing and being on the ocean and passed this trait on to his children and grandchildren. Rocky had a fantastic sense of humor and well known for his “engine room voice.” He is survived by his beloved wife of over 43 years, Denise (Doucette) Gauron of Seabrook; his children, Angel Eaton and her husband, Charles of South Hampton, April Nicoll and her husband, Michael of Seabrook and Gregory Gauron and his fiancée Sarah Hughes of Hampton Beach. He also leaves his brothers, Alfred “Ricky” Gauron and his wife Geri, of Key West, FL, Mark “Randy” Gauron and his wife Patricia of Hampton and Edmund “Ronnie” Gauron and his wife, Colleen of Hampton; his grandchildren, Jayden and Jackson Nicoll, C. J. and Maddox Eaton and Bianca Gauron and his sister-in-law and caregiver at the end of his life, Valerie Pare of Seabrook as well as many nieces and nephews. Family and friends may visit from 4 – 7 PM on Thursday, December 15, 2016 in the Remick & Gendron Funeral Home – Crematory, 811 Lafayette Rd., Hampton. A Celebration of Life Service will be held at 7 PM in the funeral home immediately following the visitation. An at sea scattering will be held in the spring.

Seabrook &#8211; Gregory A. &#8220;Rocky&#8221; Gauron, 66, of Seabrook and a former longtime resident of Hampton, passed away peacefully at Massachusetts General Hospital on Sunday, December 11, 2016 surrounded by his devoted family. He was... View Obituary & Service Information

The family of Rocky Gauron created this Life Tributes page to make it easy to share your memories.

Send flowers to the Gauron family.