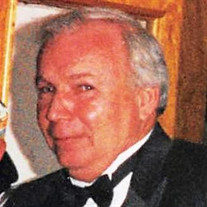 Seabrook - Roger W. Thomas, 74, a longtime resident of Seabrook and former 28 year resident of Amesbury, MA, passed away unexpectedly Sunday, August 5, 2018 at Anna Jaques Hospital. He was a U. S. Air Force veteran, who later worked many years for the MBTA as a maintenance supervisor, retiring in 1996. Post retirement, he enjoyed traveling, photography and a good game of Scrabble. He was an avid reader and bowler who appreciated nature and country drives. He was devoted to his wife and best friend, Susan Thomas of Seabrook for more than 53 years. He leaves his daughters, Rhonda Syvinski (Michael) of Rochester and Debra Smith (Dan) of Somersworth; brother, William Thomas, sisters, Carol Scaccia (Billy) and Susanne Thomas-Hogan (Frank) all from the Boston area and Barbara Fricke (Eicke) of NC; sister-in-law, Jane Schaeffer (John) of NE; brother-in-law, Doug Erickson of WI and will be remembered as Grandpa “T” by his 5 grandchildren and 4 great grandchildren and greatly missed by many dear relatives, nieces, nephews, neighbors and friends. A visiting hour will be held from 1-2 PM on Friday, August 10, 2018 at the Remick & Gendron Funeral Home-Crematory, 811 Lafayette Road, Hampton. Services will immediately follow at 2 PM in the funeral home. Relatives and friends are respectfully invited. In lieu of flowers, donations may be made in Roger's honor to a charity of ones choice that supports our troops and veterans.

The family of Roger W. Thomas created this Life Tributes page to make it easy to share your memories.

Send flowers to the Thomas family.