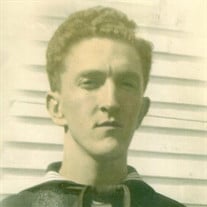 Wells, ME – Roger Elwin Tibbetts, 92, of Wells, died peacefully on Saturday, November 14, 2015 at Varney Crossing Nursing Home in North Berwick. He was born in Berwick on September 23, 1923, a son of the late Fay C. and Grace (White) Tibbetts. Roger was born and raised in Berwick. He was a WWII veteran of the United Sates Navy and served his country honorably as a Navy cook from 1942 to 1948. He had worked at the Portsmouth Naval Shipyard for 22 years and then for the Maine Turnpike Authority for 16 years until his retirement in 1989. He married the love of his life, Glenda Anita (Gerry) Tibbetts in 1955 and the young couple settled in Kittery to raise their family. Roger enjoyed fishing, hunting, playing cribbage and having coffee with his friends. He was a fantastic cook and loved preparing Sunday dinners for his family. An easy going, happy soul, Roger was always whistling and often to the annoyance of his dear wife. In his later years, he enjoyed time on the couch with his cat Shinner, while eating ice cream and watching Wheel of Fortune. He and Glenda lived in Wells with their daughter and son-in-law, Sheila and Travis Briggs, for seven years before relocating to Varney Crossing in June of 2015 due to failing health. His beloved Glenda passed in September of this year. Roger will be sadly missed by all those who knew and loved him and he is now whistling away in heaven, probably much to Glenda’s chagrin. Family members include his sons, Bruce Tibbetts and his wife Christine of Carlisle, PA, David Tibbetts and his wife Cheryl of Kittery and Mark Tibbetts of Augusta; his daughter, Sheila Briggs and her husband Travis of Wells; 8 grandchildren and many great grandchildren, nieces, nephews and dear friends. In addition to his dear wife Glenda and his parents, Roger was predeceased by his brothers, Everett F., Herbert C. and Richard D. Tibbetts and his sister, Frances Goodwin. A heartfelt thanks to the staff at Varney Crossing for the special care given to Roger in his last months. All services will be private.

The family of Roger E. Tibbetts created this Life Tributes page to make it easy to share your memories.

Send flowers to the Tibbetts family.