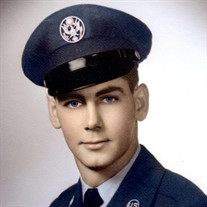 Hampton – Master Sergeant Romeo Maurice Taylor, United States Air Force, retired, 85 years old, of Hampton and Bradenton, FL, passed away peacefully at his home, surrounded by loving family, on Wednesday, October 30, 2019 after an extended illness. Romeo was born in Auburn, ME on June 6, 1934, the son of the late William and Juliette (Raymond) Taylor. Romeo was raised in Auburn, ME and after graduation from Edward Little High School, he enlisted in the United States Air Force to begin what would be a 20 plus year career serving his country. He met and married the love of his life, Beverly A. Chase and they shared over 61 years together. Being an Air Force family, Romeo and Beverly made their home in many different locations. Upon his retirement from the military, they settled in North Hampton and Romeo took a position with the United States Postal Service. He retired as a Senior Clerk with the Exeter Post Office in 1997 after over 20 years of service. Romeo’s happiest times were with family and friends but he also enjoyed traveling with Beverly, fishing and relaxing beside the pool at their Florida condo. In addition to his beloved wife Beverly, Romeo is survived by his son, Scott Taylor and his wife, Sandy Mikolajcyk Taylor of Newington and his daughter, Pamela Letizi and her fiancé, Robert Bryson of Derry. He is also survived by his grandchildren, Brandon Letizi of Derry, Zachary Taylor of Cape Town, South Africa, Alexander Taylor of Milford, CT and Hannah Taylor of Newington. Services will be private. If desired memorial donations may be to Wounded Warrior Project P.O. Box 758516, Topeka, Kansas 66675-8516,

The family of Romeo M. Taylor created this Life Tributes page to make it easy to share your memories.