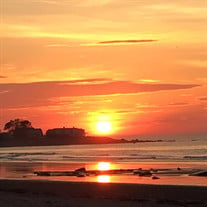 Hampton Falls – Ronald R. Tramonte, 75, of Hampton Falls, passed away peacefully on Friday, April 10, 2020. Ron was born on September 14, 1944 in Winthrop, MA, a son of the late Oreste and Lena (D’Ambrosio) Tramonte. He shared over 32 years of marriage with his beloved wife, Kathleen (Toohey) Tramonte of Hampton Falls. Ronnie grew up in Roslindale, MA and graduated from Hyde Park High with the Class of 1962. After high school, he enlisted in the Army Reserves and then began his career as a truck driver. He drove for Sanborn Motor Express, APA Transportation of Dracut, MA, William Scotsman, Walsh Transportation, the State of NH and Ryder of Newburyport. Ronnie retired from the Teamsters Union Local 25 after driving for over 34 years. He was always a hard-working man and enjoyed working in his yard for hours. Ronnie loved traveling and camping in his motor home with Kathy and their four legged son, Jesse, watching the Patriots and Red Sox games and walking on the beach nearly every day with his dogs. In addition to his wife, Kathy and Jesse, family members include his sister, Terry Hanna of Bradenton, FL, his brother, Rusty Tramonte and his wife, Joanne, of Marshfield, MA, his brother-in-law William Toohey, his sisters-in-law, Marie Paquin and Eleanore LeBel and several nieces, nephews and cousins. Due to the current pandemic, all services will be private. If desired, memorial donations may be made to the New Hampshire SPCA, PO Box 196, Stratham, NH 03885.

The family of Ronald R. Tramonte created this Life Tributes page to make it easy to share your memories.

Send flowers to the Tramonte family.