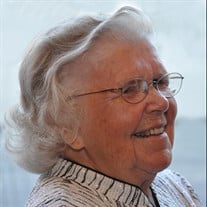 Exeter – Rosamonde (Cole) Little, 92, of Exeter formerly of Beverly, MA and Hanover, NH, passed away peacefully at Riverwoods, surrounded by her loving family Wednesday, April 3, 2019. Roz was born August 15, 1926 in Salem, MA, a daughter of the late Howard and Doris (Enslin) Cole. She was raised in Salem and Beverly Massachusetts and graduated from Beverly High School with the Class of 1943. Shortly after graduation from college, Roz married her high school sweetheart, the late George R. Little, and they settled in Marblehead to raise their family. Roz earned her Bachelor’s Degree in Nutrition from Simmons College of Boston and after working for a few years, focused her life on taking care of her family. She and George moved to Hanover in 1971 where they founded Executone New Hampshire, a telecommunications business. Upon George’s death in 1974, Roz accepted the challenge of managing the business alongside her son Bradford. They moved the business to Stratham in 1977. Eventually her son Richard and daughter Cindy joined the business as well. She continued to be active in the business until 2001. Roz’s early years were spent enjoying time and activities on the coast in the North Shore area. Sailing was a favorite activity in her earlier years. In the later years, Roz loved spending time in Wolfeboro with her family. She loved watching the grandchildren and great grandchildren learn to swim and learn to ski. Roz also was an accomplished knitter and her family will cherish the warmth of her love in the sweaters she created for us. Her most cherished times were at family holiday gatherings for Thanksgiving, Christmas, Easter, the annual 4th of July celebration in Marblehead with the extended family and simple family moments. She felt she was very fortunate to have had a close relationship with her children, grandchildren and great-grandchildren and to share many precious moments together with them. Surviving family members include her four children: Richard Little and his wife Ellen of Hampstead, Bradford Little and his wife Meg Driscoll of Stratham, Jeffrey Little and his wife Kathy of Hampton and Cindy Migliori and her husband David of Manchester. She also leaves her nine grandchildren: Jennifer Weissman and her husband Todd, Katie Little, Enslin Levasseur and her husband Ryan, Taylor Little, Shaffer Little, Greg Little and his wife Leah, Page Allogramento and her husband Adam, Scott Migliori and his wife Jill and Kristin Logan and her husband Duke. Roz leaves four great grandchildren: Lucas Weissman, Teddy Weissman, Adeleine Levasseur, and Chase Migliori. Also, Roz is survived by her sister Natalie Hamilton and her husband Gordon, her brother Roger Cole and his wife Linda and numerous cousins, nieces and nephews. Visiting hours will be from 1–2 PM Saturday April 13, 2019 in the Remick & Gendron Funeral Home-Crematory, 811 Lafayette Road, Hampton. A memorial service will immediately follow the visitation at 2 P.M. There will be a private service of burial at Waterside Cemetery, Marblehead, MA. In lieu of flowers, donations may be made the Spencer Scholarship Fund that assists Riverwoods Licensed Nursing Assistant Staff who are pursuing a nursing career or Riverwoods Licensed Nursing staff who are continuing their education in a related health field. Please mail donation to: Spencer Scholarship Fund, Riverwoods Exeter, 5 White Oak Drive, Exeter, NH 03833.

The family of Rosamonde C. Little created this Life Tributes page to make it easy to share your memories.