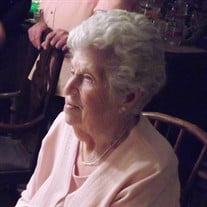 Hampton – Rose A. Marcotte, 102, passed away at the Exeter Hospital. Years ago she prepared the following: Rose Agnes Marcotte released her long grip on life and slipped away on Sunday, August 23, 2020 at the Exeter Hospital. Rose was born in Haverhill, MA on November 23, 1917, a daughter of the late Edward and Rose Anna (Proulx) Highe. She shared over 57 years of beautiful marriage with her late husband, Arthur C. Marcotte who died in 1997. She attended the St. Joseph and Hannah Dustin schools and graduated from St. James High School in 1936. Rose worked in several offices in Haverhill and for several years she served as the Clerk of the Polls in Ward 5, Precinct 2. She and Arthur moved to Hampton in 1988. Rose was a faithful communicant of Our Lady of the Miraculous Medal Church in Hampton where she served as a member of the Lady’s Sodality and for years served on the Bereavement Committee, preparing meals for grieving families in the church hall. Rose and Arthur enjoyed travelling and could boast of having been in all but a few of our glorious states plus much of Canada and its’ provinces. She enjoyed fine stitchery and all types of sewing and had made afghans for most of her family members. Rose’s extreme passion was gardening and landscaping. Flowers were to be seen everywhere in flower beds and all sorts of containers. She will be deeply missed by her daughters, Alice Moline and her husband, Russ, Colette Oleson and Michele Coughlin and her husband, John, and her son, Arthur Bernard Marcotte as well as her four grandchildren and eight great grandchildren. In addition to her parents and her dear husband Arthur, Rose was predeceased by her sisters, Marie Highe, Sister Alice Highe S.C.O. and Helen Mooshian and her infant grandson, Eric Oleson. A Mass of Christian Burial will be celebrated at 11 AM on Monday, August 31, 2020 at Our Lady of the Miraculous Medal Church, 289 Lafayette Rd., Hampton. Burial will follow in the High Street Cemetery, Hampton. Rather than flowers, memorial donations may be made to the Our Lady of the Miraculous Medal Outreach Program, 289 Lafayette Rd., Hampton, NH 03842, to David’s House 461 Mt. Support Rd., Lebanon, NH 03766, to Children’s Hospital at Dartmouth-Hitchcock CHaD Community Relations Office, One Medical Center Dr., Lebanon, NH 03756 or to a charity of one’s choice.

The family of Rose Agnes Marcotte created this Life Tributes page to make it easy to share your memories.

Send flowers to the Marcotte family.