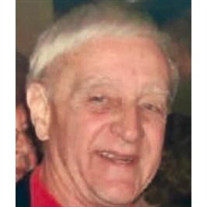 Newfields – Russell C. Eldridge, 89, of Newfields, died peacefully on Thursday, April 30, 2020 at The Pines of Newmarket. He was born on December 30, 1930 in Natick, MA a son of the late Clarence C. and Rachel (Spooner) Eldridge. Raised in Natick, he graduated from Natick High School in 1948. Russell went on to attended Newton Jr. College for one year before transferring to the University of Massachusetts Amherst, where he graduated with the Class of 1952. After graduation he enlisted in the United States Air Force, proudly serving four years during the Korean War. Returning home he attended Bentley University for 2 years, graduating in 1958. In 1959 he married his wife of 61 years, Jo ’Jo-Anne’ (Wales) and they moved to Wellesley, MA. He then started his accounting career at a firm in Boston, all while attaining his Master’s Degree from Northeastern University, teaching accounting at Bentley University (8 years) and attaining his C.P.A. Russell went on to start his own accounting practice, which he owned and operated for 45 years, having offices in Cambridge, MA, Chestnut Hill, MA and Northwood, NH. In 1987, Russell and Jo moved to Northwood, where Russell continued practicing accounting in addition to serving on multiple boards and town committees, including Treasurer of Northwood Congregational Church for 29 years. After 33 years in Northwood, he and his wife moved to Newfields to live with their daughter. Surviving family members include his wife Jo; three sons, Raymond of George, Craig of Arizona, Darryl of Massachusetts; daughter Marjorie-Jo of New Hampshire; sister Joanne of Massachusetts; 8 grandchildren, multiple great grandchildren and 6 nieces & nephews. A celebration of his life will be held at the convenience of his family at a later date.

Newfields &#8211; Russell C. Eldridge, 89, of Newfields, died peacefully on Thursday, April 30, 2020 at The Pines of Newmarket. He was born on December 30, 1930 in Natick, MA a son of the late Clarence C. and Rachel (Spooner) Eldridge. Raised... View Obituary & Service Information

The family of Russell C. Eldridge created this Life Tributes page to make it easy to share your memories.

Send flowers to the Eldridge family.