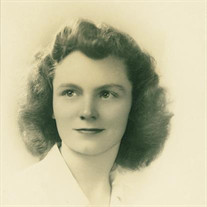 North Hampton - Ruth Elizabeth Gillie, 90, of Cape Coral, FL and North Hampton, died peacefully on Thursday, March 9, 2017 at Portsmouth Regional Hospital. She was born September 8, 1926 in Stoneham, MA the daughter of the late Edward D. McEachern and Dana M. (Eddy) Foster. Raised in Middlebury, Vermont by her mother, Dana and stepfather, Ellis Foster she graduated from Middlebury High School with the Class of 1944 and later from Becker College in Worcester, MA as a medical secretary. She went on to work at Albany Medical College in NY, where she met her future husband of 62 years, Dr. Edward Gillie and dedicated her life to raising her family. Her husband’s position moved them to Garden City, NY in 1961, then Manchester, in 1975 and later Cape Coral to 1995. Recently in 2016, she and her husband moved back to New Hampshire to be closer to family where they resided in North Hampton. Ruth was an avid reader and writer, who adored music, dancing, crocheting, and her love of the ocean and where she loved to sail. Ruth’s utmost joy was spending time with her family and all her friends. Ruth had a zest for life and adding her own insights to whomever she met. She was not shy on her convictions and we will miss her spontaneity and spunk. In addition to her husband, family members include her children, Luke Edward Gillie and his wife Rachelle of Bradford, MA. Kimberly “Lee” Gillie Egan and her husband Glenn of Manchester, Dana Gillie Mularoni and her husband Dean of North Hampton, brother Edward Foster and his wife Carolyn of Cape Coral, FL, sister Marion Foster of Schenectady, NY. Also was blessed with 7 grandchildren and 12 great grandchildren and several nieces and nephews. Visitation will be held from 4-7 PM on Thursday, March 16, 2017 in the Remick & Gendron Funeral Home - Crematory, 811 Lafayette Road, Hampton. A Mass of Christian Burial will be celebrated at 11 AM on Friday, March 17, 2017 in St. Theresa Parish, 814 Central Road, Rye Beach, NH. Relatives and friends are respectfully invited. Burial will be private. In lieu of flowers, donations may be made to the Macular Degeneration Association, 5959 Cattleridge Blvd., Suite 100, Sarasota, FL 34232.

The family of Ruth E. Gillie created this Life Tributes page to make it easy to share your memories.

Send flowers to the Gillie family.