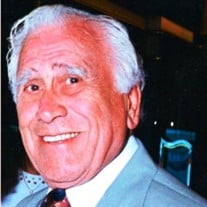 Rye - Salvatore “Sal” Zona, of Rye and a former resident of North Hampton, passed away peacefully on March 08, 2017 at the age of 96. He was born August 5, 1920 in Belmont, MA, a son of the late John and Providenza (Scandurra) Zona. Sal was a barber’s barber with a capital ‘B’. He also served in the South Pacific in World War II as a medic. He earned his first stripes, though, as a barber in 1938 and cut hair until just after Pearl Harbor. He picked up his scissors again after leaving the Army in 1946 at Fort Devens, Massachusetts, working for his father, John Zona. Sal eventually succeeded John as head of the operation. In 1956, Sal applied for and was awarded the concession at the Pease Strategic Air Command (SAC) base to run Pease’s four barber shops and one beauty salon. Pease was so new, Sal said, “When I started there, the cement wasn’t dry on the runway”. At Pease, Sal had three jobs managing his businesses and barbers while still cutting hair. The first 35 years he cut hair as a civilian employee of the Air Force. Next, he cut hair for 15 years as a civilian employee of the NH National Guard. Finally, he cut hair for 7 years as owner of the International Barber Shop at Manchester Square in Pease International Tradeport. Sal remained at Pease for 57 years until his retirement in 2013. Most think Sal would still be working if not for an unfortunate car accident that happened when he was 93 while driving home from work. Sal retired shortly thereafter. At Pease, Sal watched his ‘boys’ grow up and become high ranking officers. He saw their sons and daughters, too, rise through the ranks among the nations’ services. He watched SAC grow and then fade and eventually leave. He was there at another birth, that of the Pease International Tradeport and watched PIT mature. And all the time, he cut their hair and watched local history and the Red Sox and recorded it in his mind. Some memorable moments in his career were: He and his crews cut the hair of thousands of Korean War draftees’ in 1952 at Fort Devens. One of the recruits, Eddie Fisher, aka ‘Princess Leia’s father, gave a one song concert, “Oh my Papa”, at Sal’s request, in an effort to keep his hair longer than the usual Army recruit. Sal generously let him keep an extra 1/8 of an inch. Eddie’s wasn’t the most famous head of hair he cut. That head of hair belongs to the 41st President of the United States, George H.W. Bush. Sal and his barbers moved among the men confined in the ‘alert area’ during the Cuban missile crisis cutting their hair. Sal estimated 375,000 heads of hair fell ‘under the knife’ with his scissors during his life. His career lasted 75 years. Sal was also an amazingly smart and aware man. Having a conversation with Sal was a real eye-opener. His breadth of knowledge of the military, business, local politics, people and of course, the Red Sox, always surprised and enriched the first time listener. He was a careful observer and recorder and valued his time with the many thousands of his ‘folks’. Sal’s beloved wife Marjorie passed in 2015. He is survived by several nieces and nephews. He will be missed by all those who took the time to listen to him as he talked and clipped and watched ‘his’ Pease family grow and fade and grow again. Family and friends may visit from 3 to 6 pm on Wednesday, March 15, 2017 in the Remick & Gendron Funeral Home – Crematory, 811 Lafayette Rd., Hampton. Military honors will be held promptly at 6 pm. Sal will be buried privately next to his beloved Marge in the NH State Veterans Cemetery.

The family of Salvatore A. Zona created this Life Tributes page to make it easy to share your memories.

Rye - Salvatore “Sal” Zona, of Rye and a former resident of North...

Send flowers to the Zona family.