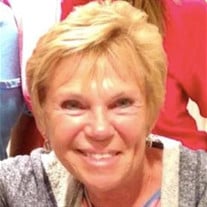 Hampton – Sandra J. Walls, 68, of Hampton died Tuesday, June 13, 2017. She was born in Amesbury, Mass., on November 1, 1948 a daughter of the late Guy W. and Mabel (Bartlett) Smith, Jr. Sandra was raised in South Hampton and graduated from Amesbury, Mass. High School with the Class of 1966. She was employed as a supervisor for Verizon for over 20 years and retired from Long Term Health Partners in Portsmouth where she worked in the research department. She made her home in Hampton since 2002 coming from Amesbury. Family was most important and she enjoyed gardening, spending time at the family camp in Maine, being at Hampton Beach, and watching her bird feeders in the backyard. She also possessed many talents, including sewing, needlepoint, stained glass, and cake decorating. She shared 33 years of marriage with her husband, Donald Walls. In addition to her husband, family members include two sons, Scott Cloutier and his wife Becky of East Kingston, Craig Cloutier and his wife Woneta of South Hampton, her stepdaughter, Hattie DeRaps of Farmington, ME, six grandchildren, McKenzie and Kaylie Cloutier, Ethan DeRaps, Kristen, Kelly and Sam Swan, two great-grandchildren, Wyatt and Lucas, two sisters, Carol Smith of South Hampton, Judy Hill and her husband Roy of North Hampton, a niece and a nephew. Private services will be held at the convenience of the family. If desired, donations may be made to a charity of one’s choice. Arrangements are by the Remick & Gendron Funeral Home-Crematory, Hampton.

The family of Sandra J. Walls created this Life Tributes page to make it easy to share your memories.