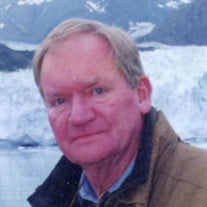 Portsmouth - Sanford “Sandy” Chace Sherman, 81, of Portsmouth, died March 28, 2018 at his home with his loving family by his side. He was born September 9, 1936 in Newport, Rhode Island, the son of the late Alwyn Tanner and Eleanor Chace (Lake) Sherman. Sandy grew up in Rhode Island and Concord, New Hampshire attending elementary school in Middleton, Rhode Island, and Concord High School graduating with the Class of 1954. He attended Pierce Business School in Concord and graduated from the National School of Savings Banking at Brown University. Sandy began his career working for two years at Mechanics National Bank in Concord. He joined Piscataqua Savings Bank in 1960 serving in many capacities, ultimately as president/chief executive officer from 1980 until his retirement in 2000. He served on the Board of Directors of the New Hampshire Association of Mutual Savings Banks and for fifteen years as a director of Pax World Funds headquartered in Portsmouth. He also served on numerous community non-profit boards including Portsmouth Hospital, United Way and the John Paul Jones House as treasurer. He served eight years in the U.S. Army Reserve as a staff sergeant in the 368th Engineer Battalion. He was a former and honorary member of Portsmouth Rotary Club, past treasurer and Paul Harris Fellow, a member of the Federal Fire Society and Island Club of New Castle, incorporator of the Mark Wentworth Home and also a member of Mechanic Fire Society from 1987 until 2009. As president of the Bank, Sandy saw the need in Portsmouth for a community dental program for children and he led the corporate giving effort for Families First to open their dental program in 2003. The program has successfully continued and is now expanded to serve children and adults including mobile dental care at Cross Roads House and other sites. Sandy and his wife Helen traveled extensively all over the world and they loved spending time with their grandchildren. He also enjoyed fishing, including many memorable trips to Tall Timber Lodge on Back Lake in Pittsburg, New Hampshire for over 50 years. He shared nearly 60 years of marriage with his wife Helen (Robinson) Sherman whom he married April 12, 1958. In addition to his wife, he leaves two daughters, Lisa Sherman Dumont and her husband Michael of Hampton, Susan Sherman Foye and her husband Donald of Kittery, seven grandchildren, Laurel and Thomas Dumont, Ashley, Ryleigh, Madison, Tanner and Oscar Foye. Private services will be held at the convenience of the family. The family suggests donations be made to Families First Health and Support Center, 100 Campus Drive, Suite 12, Portsmouth, NH 03801 www.familiesfirstseacoast.org or Alzheimer’s Association, 225 N. Michigan Avenue, Fl. 17, Chicago, IL 60601 www.alz.org.

The family of Sanford Chace Sherman created this Life Tributes page to make it easy to share your memories.