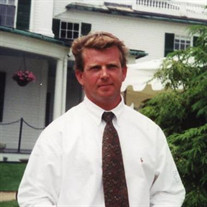 North Hampton - Scott Thomas Bedell, 49, of North Hampton passed away peacefully, Thursday, March 17, 2016 at his home surrounded by loving family after a brave battle with cancer. He was born August 30, 1966 in Beverly, MA, the son of Katherine (Kerr) Emonds of North Hampton and the late Thomas M. Bedell. The news may come as a surprise to many who knew Scott, but he never wanted to worry his friends and besides, he always seemed so full of life. It was this characteristic spirit that led him to Boynton Beach, Florida in the early 1990s, where he built a successful landscaping business and learned to surf. Trees, plants, and the ocean were a daily part of his life thereafter: whether he was caring for some of South Florida’s most verdant properties, riding some of the world’s most celebrated waves, or walking his dog, Roxy (Boynton’s unofficial surf Mascot) on the beach. He returned home to be closer to his family in 2008, but his passion for surfing and landscaping persisted, despite the colder waters and winters. In addition to his devoted mother, Scott is survived by his step-father Dr. Kenneth Emonds of North Hampton; sister Wendi Bedell Farid and her husband Khalid; nieces, Nouelle, Kenza, and Aaliyah Farid; step-brother Zack Emonds and his fiancée Michele Ciccarelli; aunt Deborah Crocker; uncle Kenneth Crocker; cousins, Carrie Crocker Packer and Michael Crocker and their families; aunt Patricia Bedell Carroll; uncle Steve Carroll; aunt Bonnie Bedell Forman; uncle Olin Forman; cousins, Tiffany Carroll-Ray, Josh Forman, Douglas Forman, and their families and many wonderful and caring friends in the surfing community of Hampton Beach and Boynton Beach, FL. Also remembered are Scott’s cherished maternal grandparents, the late Barbara Brooks Kerr and Roger Brooks Kerr; his late uncle Roger Brooks Kerr, Jr. of Jamestown, RI, and Roxy, Scott’s beloved dog, who will always be with him. Visitation will be held from 2 to 4 PM on Thursday, March 24, 2016 in the Remick and Gendron Funeral Home, 811 Lafayette Road, Hampton. A memorial service will immediately follow at 4 PM in the funeral home. Relatives and friends are respectfully invited. In lieu of flowers contributions can be made to: “The Linda-Jo Fund”, which honors the memory of Linda Josephine Novak-Paugh, by supporting deserving young surfers, so they too can catch a wave. Donations can be sent to: TD Bank North, 270 Lafayette Road, Seabrook, NH 03874 or Merrimack Valley Hospice, 360 Merrimack Street, Building 9, Lawrence, MA 01843.

North Hampton - Scott Thomas Bedell, 49, of North Hampton passed away peacefully, Thursday, March 17, 2016 at his home surrounded by loving family after a brave battle with cancer. He was born August 30, 1966 in Beverly, MA, the son of Katherine... View Obituary & Service Information

The family of Scott Thomas Bedell created this Life Tributes page to make it easy to share your memories.

Send flowers to the Bedell family.