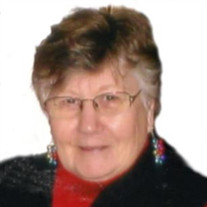 Exeter, NH – Sheila Mary Ford, 85, entered eternal rest on Nov. 17, 2020. Sheila, who moved to Exeter, New Hampshire, in December 2019 to be near family, grew up in Boston and spent many years living in Camden and Rockport, Maine. Born Oct. 10, 1935, she was the daughter of Bridget (Condon) and Clarence Eugene Ford of Boston. Sheila was a retired social worker at Quarry Hill in Camden, Maine, and also devoted 30 years of her life as a member of the Sisters of Charity of Halifax. She was an active member of Our Lady of Good Hope Catholic Church in Camden where she volunteered with the church’s Social Justice and Peace Group. She was very active in local and global charities including the family favorite: Purchasing a goat for a family in Haiti, which they proudly named after her. While living in Camden, she volunteered weekly at the Interfaith Food Cupboard and St. Bernard’s Soup Kitchen; and at the NuDay Syria program, collecting, sorting and packing clothing, household and medical supplies for Syrian refugees. She could be seen driving around Camden in her cherry red Dodge Charger, which she bought at age 80 because she had always wanted a red sports car, with flyers to collect donated items for the refugees. This included cruising around the marinas, persuading boat owners to donate their used vinyl winter boat wraps for use in packing large pallets of donated items to be shipped to refugee camps. Sheila was a fierce advocate for the underserved and had a soft spot for young children and seniors. While in her 70s and 80s, she volunteered at the Head Start program in Rockland, and assisted numerous seniors in the community with transportation to medical appointments and with finding new housing, particularly those who had minimal financial resources and little or no family or social support. She was a big fan of opera and classical music and was an avid reader of both history and non-fiction; you’d be hard pressed to find an empty space in her home as it was filled with her favorite books. She enjoyed traveling and listed a cruise to Alaska with her sister Kathleen, and a visit to Ireland to see her mother’s birthplace as two of her all-time favorite trips. A life-long learner, Sheila was a regular attendee at the annual Camden Conference, a non-profit organization that brings together people to deliver education and discussion on world issues. She was active in local politics and loved a good debate about national politics – the better informed her opponent, the more she enjoyed the challenge. While she was unable to vote in the 2020 Presidential Election, her family is confident she will be doing an Irish jig in Heaven on Jan. 20, 2021, to celebrate the inauguration of Joe Biden and Kamala Harris. The oldest of four children – by about five minutes – she is survived by three siblings, her twin Patricia Slingsby of Rye, NH; Kathleen Ford of Rye, and Gene Ford of Gilford, NH. She is also survived by one nephew Richard Slingsby and his wife Jean of Manchester, NH; four nieces Susan MacFarlane and her husband Ray of Arizona; Donna Burge of Lynnfield, MA; Diane Little of Hampton; and Ellen Miller and her husband Jim of Hampton. She also leaves behind a great niece, Kate Slingsby of Florida, and three great nephews, Ryan Burge of Stoughton, MA, Andrew Slingsby of North Carolina, and Michael Miller of Hampton, as well as many cousins in Lynn, MA; New York and Mitchelstown, County Cork, Ireland; and many close friends in Camden. She is predeceased by her parents, her brother-in-law Richard O. Slingsby, and her great nephew Christopher Burge. Funeral and burial will be private.

Exeter, NH &#8211; Sheila Mary Ford, 85, entered eternal rest on Nov. 17, 2020. Sheila, who moved to Exeter, New Hampshire, in December 2019 to be near family, grew up in Boston and spent many years living in Camden and Rockport, Maine. Born... View Obituary & Service Information

The family of Sheila M. Ford created this Life Tributes page to make it easy to share your memories.

Send flowers to the Ford family.