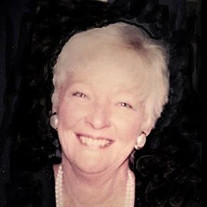 Exeter – Sheila M. Vaughn, 87, of Exeter, died December 19, 2016 at her home surrounded by her loving family. She was born July 20, 1929 in Haverhill, Mass., the daughter of the late Francis M. and Julia (Aherne) Donahue. Raised in Haverhill she attended local schools and graduated from St. James High School. She was employed at the former Arlington Trust Bank in Newburyport for 20 years beginning as a teller and retiring as a manager. She resided in Newburyport from 1965-1983 and for the next twenty five years on Seabrook Beach. She made her home in Exeter the past 10 years. Sheila enjoyed her family and grandchildren, reading, traveling, the beach, dining out, and spending time with her many wonderful friends. She was the wife of the late James F. Vaughn, Jr. Family members include her son, Stephen Law and his wife Andrea of Greenland, three grandchildren, Carolyn Jones and husband Aaron, Kathryn Rolston and husband Timothy, and Samuel Law. Sheila was “Gigi” to three great grandsons, Wes, Trent and Cole Rolston. Visiting hours will be held from 3 to 5 P.M. Friday December 30, 2016 at the Remick & Gendron Funeral Home-Crematory, 811 Lafayette Road, Hampton. Services will immediately follow at 5 PM in the funeral home. Relatives and friends are respectfully invited. In lieu of flowers, donations may be made to Make a Wish Foundation, 814 Elm Street, Suite 300 Manchester, NH 03101 www.nh.wish.org or JDRF Diabetes Foundation, 26 Broadway, 14th Floor, New York, NY 10004 www.jdrf.com.

The family of Sheila M. Vaughn created this Life Tributes page to make it easy to share your memories.