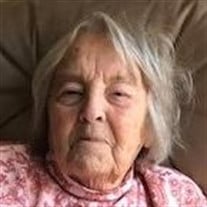 North Hampton – Shirley B. Carter, 91, formerly of North Hampton died Thursday, February 7, 2019 at Brookdale Spruce Wood in Durham with family by her side. She was born in Portsmouth, May 9, 1927 a daughter of the late Robert O. and Helen (Kimball) Brown. Shirley graduated from Hampton Academy with the Class of 1945 and received her Bachelor’s degree in Education from the University of New Hampshire in 1970. Shirley taught school at the Seabrook Elementary School for a time and then served as a substitute teacher in North Hampton and several other surrounding towns. She served on the North Hampton Conservation Committee for many years, was active with the North Hampton PTA, 4H Clubs at the Stratham and also Deerfield Fair. She was also a member of the former North Hampton Ambulance Corp. She was the wife of the late Harlan E. Carter who predeceased her in 2001 and her son Robert H. Carter in 1959. Family members include two sons, Paul T. Carter of North Hampton, Harlan E. Carter, Jr., of San Mateo, CA, three daughters, Sonja Hartl and husband Mike of San Francisco, CA, Beverly Teichs and husband Nicholas of Gloucester, VA, Sherri Thayer and husband Philip of North Hampton, nine grandchildren, seven great grandchildren, her sister, Betty Blatchford of Hampton, nieces and nephews. Services will be held at 2 P.M. Sunday, February 10, 2019 at the Remick & Gendron Funeral Home-Crematory, 811 Lafayette Road, Hampton. Relatives and friends are respectfully invited. In lieu of flowers, donations may be made to the Winnacunnet Dollars for Scholars P.O. Box 1593, North Hampton, NH 03862 or Alzheimers Association 8180 Greenboro Drive, Suite 400, McLean, VA 22102.

North Hampton &#8211; Shirley B. Carter, 91, formerly of North Hampton died Thursday, February 7, 2019 at Brookdale Spruce Wood in Durham with family by her side. She was born in Portsmouth, May 9, 1927 a daughter of the late Robert O. and... View Obituary & Service Information

The family of Shirley B. Carter created this Life Tributes page to make it easy to share your memories.