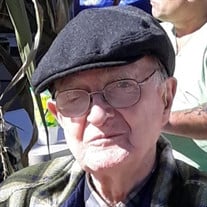 Londonderry – Sidney Bleeker, 93, of Londonderry, formerly of Seabrook, died peacefully in his daughter's home Monday, January 4, 2021 surrounded by loved ones. He was born in Holland, September 10, 1927, a son of the late Thomas and Gertrude (Venema) Bleeker. He immigrated to New Jersey in 1947 and moved to Salem, NH in 1966 where he resided until 1993 when he moved to Seabrook. He has made his home with his daughter Brenda since 2016. Mr. Bleeker worked as a nursing home administrator for 10 years at the former Woodland Nursing Home in Methuen, MA. He was an accountant all of his life before retiring at age 85 from Lowell Medical, in Lowell, MA. He had proudly served in the National Guard for 10 years. He attended the First Baptist Church of Hampton Falls. He was a faithful servant of God his entire life and touched many people with the magnitude of his faith. He was the patriarch of the family. He was incredibly proud of his culture and heritage, often telling remarkable stories of his life. He enjoyed music prior to losing his hearing, reading the word, and drawing. One of his favorite places was the beach. He was a devoted husband of the late Lois (Buchman) Bleeker who predeceased him in 2009. Family members include 6 children, Gary Bleeker of Albuquerque, NM, Kevin Bleeker of Windham, Cindy Dalwit of Methuen, MA, Brenda Martino of Londonderry, Shawn Bleeker of Florida, Todd Bleeker of North Andover, MA, 3 nieces, 17 grandchildren, and many great grandchildren. Services will be held at 12 Noon, Friday, January 8, 2021 in the Remick & Gendron Funeral Home-Crematory, 811 Lafayette Road, Hampton. Relatives and friends are respectfully invited and may call at the funeral home from 11:00 a.m. until the hour of the service. Burial will be in the Hillside Cemetery, Seabrook. If desired, donations may be made to the First Baptist Church, 3 Lincoln Ave., Hampton Falls, NH 03844.

Londonderry &#8211; Sidney Bleeker, 93, of Londonderry, formerly of Seabrook, died peacefully in his daughter's home Monday, January 4, 2021 surrounded by loved ones. He was born in Holland, September 10, 1927, a son of the late Thomas and... View Obituary & Service Information

The family of Sidney Bleeker created this Life Tributes page to make it easy to share your memories.

Send flowers to the Bleeker family.