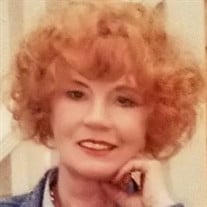 Portsmouth - The beautiful Siobhan Gogarty-Delanty passed away on Monday August 6, 2018. For those who knew her, life will never be the same. Her Irish roots made her lovable and charming and at the same time stubborn and opinionated. If you knew her, you always knew where you stood with her. She was born in Dublin, Ireland on January 9th, 1932. The third in line of 11 children, she regaled those around her with the illustrious tales of days by the Irish Sea and of the trouble she and her siblings got into. She later met the father of her three children Maurie Hyman of Kalamazoo, Michigan in Shaftsbury, England. She moved to his hometown while her first born was still a toddler, leaving behind all those she ever knew and loved. She raised her three children Garry, Kevin and Siobhan and went back to school after she separated, while also working. Borgess Hospital was likely never the same after she left! Her second chapter began the day she met her beloved husband, Pat Delanty. She knew by the end of that night, she was going to spend the rest of their days together. Truly love at first sight! His career took them to the east coast. They started in Hilton Head Island and traveled north with the intent to settle on a place she liked. On that first drive by the Irish roses and rocky coast line of Rye, she knew they found their new home together. The places she lived will be forever graced with the beautiful gardens she created. She was truly gifted with a green "arm" but her true talent was her singing voice. She was a trained soprano with a knack for emitting emotion like no other. When she sang, it literally brought tears to your eyes. Her love of singing was only outweighed by her love for her family and friends around the world. She is survived by her son, Kevin Hyman of New York, NY, her daughter, Siobhan Hyman of Portsmouth, many brothers and sisters around the world and dozens of wonderful nieces and nephews. She is predeceased by her husband John Patrick "Pat" Delanty, her son Garry Hyman; her sister, Nualla Blatcher and brother, Desmund Gogarty. A Celebration of Life will be announced next month. Assistance with the arrangements was by the Remick & Gendron Funeral Home-Crematory, Hampton.

Portsmouth - The beautiful Siobhan Gogarty-Delanty passed away on Monday August 6, 2018. For those who knew her, life will never be the same. Her Irish roots made her lovable and charming and at the same time stubborn and opinionated. If you... View Obituary & Service Information

The family of Siobhan Gogarty-Delanty created this Life Tributes page to make it easy to share your memories.

Send flowers to the Gogarty-Delanty family.