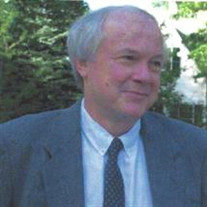 Portsmouth – Stanley Ingram Shaw, 75, of Portsmouth, New Hampshire passed away at home in the early morning hours of May 25, 2020. Born in Coulee Dam, Washington, to Carl Ingram Shaw and Ruth Eleanor Shaw (Yates). Stanley attended North Syracuse High School and the University of Colorado at Boulder where he completed the Air Force ROTC program with a bachelor’s degree in Botany. During his summers in college, he worked for U.S. Forest Service in Nevada, as a forest fire scout. He met his wife Helen Shaw in South Dakota at Ellsworth Air Force Base, where both were serving in the Air Force. They married in June in the late 1960’s. He was later stationed in Labrador, Newfoundland, Canada. Shortly after the birth of his first child Jodi in Newfoundland, the family was stationed at Beale Air Force Base in California where his second child Daniel was born. After an honorable discharge from the USAF with the rank of Captain he moved to New England, where his third child Andrew was born. Here, he served as manager at various country clubs, and later managed the Officer’s Club at Pease Air Force Base. He later owned and operated Betty’s Kitchen in North Hampton, NH for fifteen years. After selling the restaurant, he continued working in the industry as owner and operator of Betty’s Kitchen Catering, also located in North Hampton, NH. He retired in 2019. A dedicated husband and devoted grandfather, he was a kind-hearted man who enjoyed nature and loved animals - especially dogs and birds. A fan of history, hiking, gardening, jogging and traveling, he also loved country music. He was a longtime member of Spinnaker Point Recreational Center, where he especially enjoyed the indoor jogging track and the people he met there. He is survived by his wife of fifty years, Helen Shaw (Hussey), and his three children: daughter Jodi Ingram Shaw (Antonello Di Mattia), son Daniel Ingram Shaw (Stephanie) and son Andrew Jason Shaw. He is also survived by four grandchildren: Logan Patrick Shaw, Willow Mae Shaw, Hale Howell Thurston and Stanley Ingram Thurston along with several nieces and nephews, sisters-in-law Linda Shaw and Maryanne Hussey, and brothers-in-law Timothy Hussey and Michael Campbell. In addition to his parents, he is predeceased by brother Larry Lyle Shaw and sisters-in-law Noreen Hussey and Mary Campbell. The family would like to thank the staff of the Seacoast Cancer Center and the nurses and aides of Beacon Hospice Care. The family will be holding a small, private service for immediate family members only.

The family of Stanley I. Shaw created this Life Tributes page to make it easy to share your memories.

Send flowers to the Shaw family.