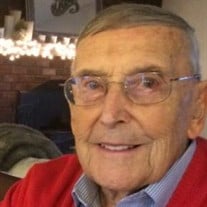 Hampton - Stanwood S. Brown passed away at his home June 25, 2018 at the age of 93. Stan was born at Hampton Beach on April 23, 1925 to Percy H. Brown and Hazel Bayers. He grew up in Hampton during the Great Depression and piloted B-25s in World War II as part of the Flying Tigers within the U.S. Army Air Corps (now the U.S. Air Force) in China. After the war, Stan returned to Hampton and married Jewell Sherburne. He was actively involved in the community, serving as a State Representative in the NH Legislature, a Director of Hampton Cooperative Bank, and a bail commissioner for the Hampton Police Department. Stan was also a 70 year member of the Masonic Fraternity, a Past Master of Star in the East Lodge #59 in Exeter, a Shriner, and a member of the Scottish Rite. Stan was a lifelong entrepreneur with many successful businesses. He owned and operated a Western Auto store in the 1950s and 1960s and became one of the first Honda dealers in the country. He then founded Hampton Coach, an upholstery company for Chevrolet interiors and New England Old Car Barn, an antique automobile and parts supplier. Stan was also a NH real estate broker for decades and bought, rented, and sold many properties in the area. A lifelong student, Stan earned a Bachelor of Science in Business and Entrepreneurship from Granite State College in 2004 at the age of 79. He was dedicated to his wife of 68 years and family. Stan is survived by his wife Jewell, son Arthur and wife Corrine Brown, and grandchildren Blake Brown and Jenny and Carleton Simpson, nieces and nephews. Stan was predeceased by his daughter, Julia Brown and brothers, Carroll and Haddan Brown. Visiting hours will be held from 6-8 P.M. Thursday, June 28, 2018 at Remick & Gendron Funeral Home-Crematory, 811 Lafayette Road, Hampton. Services will be held at 10 A.M. Friday, June 29, 2018 in the funeral home. Burial will follow in the High Street Cemetery, Hampton. Relatives and friends are respectfully invited. In lieu of flowers, donations may be made to the Hampton Historical Society PO Box 1601, Hampton, NH 03843-1601.

Hampton - Stanwood S. Brown passed away at his home June 25, 2018 at the age of 93. Stan was born at Hampton Beach on April 23, 1925 to Percy H. Brown and Hazel Bayers. He grew up in Hampton during the Great Depression and piloted B-25s in... View Obituary & Service Information

The family of Stanwood S. Brown created this Life Tributes page to make it easy to share your memories.