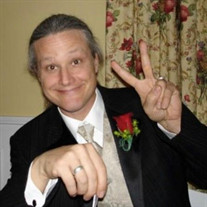 Eliot, ME and Dallas, GA - Stephen Charles Ayre, 51, died Saturday, June 10, 2017, at his parents’ home in Eliot, Maine, following a two year battle with cancer. With him were his parents Walter and Patricia Ayre, his wife Whitney, and sister, Jennifer. He was born March 9, 1966 in Syracuse, NY, moved to Portsmouth, NH, northern California and then to Eliot, ME where he attended school from grade one through freshman year at Marshwood High School. Steve’s family then moved to greater Atlanta where he graduated from Northside High School of Performing Arts and studied music at Georgia State University. For many years, Steve was a part of the Atlanta music scene with bands from Great Brittain to Texas Crude, Stealing Time and Tinfoil Gargoyles/Undertone. Steve was a talented musician with a gift for writing, he told elaborate stories and had a quirky sense of humor that always entertained. So many friends have expressed that Steve was an inspiration, challenging them to follow their dreams and fulfill their potential. Epilepsy and major seizures played a pivotal role in Steve’s life decisions but he would not allow his illness to affect his spirit. Steve resided in Dallas, Georgia with his wife Whitney, stepson Aidan, mother-in-law Muriel Wheeler and his three beloved cats. He was a hard-working, dedicated employee at Dekra International for more than 15 years managing state emissions and safety inspection stations in and around Atlanta. Throughout Steve’s battle with cancer, his positive attitude and ready smile endeared him to all of the medical personnel who cared for him, from the physician who originally diagnosed him to his hospice care providers. He sincerely appreciated each and every one. He is survived by his wife Whitney and stepson Aidan of Dallas, GA; parents Walter and Patricia Ayre of Eliot, ME; sister Alicia Ayre of Marietta, GA; sister and brother-in- law Jennifer and Chris Doyon, their sons, Zach and Adam of Eliot, ME; Uncle Albert and Aunt Gail Ayre of So. Portland and Rangeley, ME; cousins Scott Ayre and Kim Ayre of So. Portland, ME; Uncle Joseph and Aunt Mim Supsinskas of Whidbey Island, WA; cousins Noel Mladinichs of St. Petersburg, FL; Jamie Supsinskas of Orlando, FL and Callie Supsinskas of San Francisco, CA. Steve was predeceased by his niece Jamie Doyon of Eliot, ME; grandparents Joseph (died in WWII) and Jennie Supsinskas of New Britain, CT and grandparents Walter and Mildred Gray Ayre of Laconia, NH. Celebrations of Steve’s life will be held in Atlanta, GA and in Rangeley, ME (his “favorite place on earth”) at a future date.

Eliot, ME and Dallas, GA - Stephen Charles Ayre, 51, died Saturday, June 10, 2017, at his parents&#8217; home in Eliot, Maine, following a two year battle with cancer. With him were his parents Walter and Patricia Ayre, his wife Whitney, and... View Obituary & Service Information

The family of Stephen Charles Ayre created this Life Tributes page to make it easy to share your memories.

Send flowers to the Ayre family.