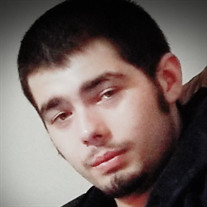 Stephen C. Hansen, 22 years old, of Seabrook, suddenly and tragically passed away in a horrible car accident on Saturday evening, July 28th, 2018. Stephen was born on February 14, 1996 in Boston, MA, the son of Meredith Hansen and the late Wayne MacLeod. In addition to his mother, he sadly leaves behind his stepfather John Balser, his brother Jason MacLeod, his sister Melissa MacLeod and his grandparents Rick and Elaine Hansen. He also leaves his aunts and uncles, Claire, Paul, Kathleen, Tommy and Rita Sozio, his cousins, Janeda Testa, Joshua Sozio, Chris and TJ Sozio and his cousin and Godmother, Janelle Sozio. He is also survived by his girlfriend of 5 long years, Ashley Lynn Cote and their 2 beautiful children, 3 year old Jayden and 9 month old Isaac. Together Stephen and Ashley were welcoming their third little boy into the world. He was a happy and active child who loved playing outside in the backyard with his father and his dog "Boss." Stephen loved wrestling, Pokémon cards, video games, skateboarding, snakes and bugs! He was the clumsiest little kid that you'd ever meet, constantly stubbing his chubby toes yet always refusing to wear socks or shoes. Stephen was happy as long as he was running through some type of nature. He wanted to be outside in the dirt building mud pies or throwing a ball. As a child Stephen loved to eat and was at his happiest when his mother would bake brownies and let him lick the battered bowl and spoon. He loved working on cars with his father in the driveway and wrestling with him on the living room floor. Stephen was always getting into some type of mischief. When he was 9, he snuck into the neighbor’s garage to view his golf club collection and ended up knocking down the entire rack! He proceeded to run across the lawn, tripped over his ripped pants, stubbed his toe, and got caught! Stephen had an adventurous soul and was curious by nature. He loved a good laugh! Some of our family’s fondest memories were made during summers at the family home on Cape Cod. His father would take turns pushing Stephen and his older cousins around for hours in one of those old-school buggies with the orange tops. Around and around in circles, dust from the dirt whipping through the air and Stephen in the buggy with his chubby cheeks painted red, hiked up so high his eyes squinted. The sound of his laugh was piercing to the heart and will be forever imprinted in the memories of those who loved him most. His laugh could've brought tears of joy to anyone’s eyes. We were hoping to watch Stephen extract that same laugh from his boys for years to come but unfortunately things don't always play out the way we envision them and sometimes history repeats itself. Unfortunately Stephen and his siblings suffered the loss of their father early on. Being that Stephen was the oldest child, it was incredibly hard for him to process. It brings comfort to our family knowing that Stephen and Wayne are together now. As an adult, Stephen enjoyed playing basketball with his eldest son and spending time with his children and girlfriend. He worked full time as an IT contractor to help support his family. He was an extremely loyal person to his friends and family. He would give you the shirt off of his back. Stephen truly had a heart of gold and was someone that you wanted to have in your corner. For some very unfair reason his time within this world was cut short. His mother now forced to bury a child before herself experiences more pain than any mother should ever have to endure in a lifetime. Ashley and Stephen were saving money and planning on getting their own apartment! It brings our family earth shattering pain to be planning funeral arrangements instead. Stephen leaves behind so many friends and family who loved him dearly. He is and always will be terribly missed! We invite all of his closest friends and family to come say your goodbyes, pay your respects, and share your fondest memories of Stephen on Sunday, August 5, 2018 from 2pm to 5 pm at the Remick & Gendron Funeral Home – Crematory, 811 Lafayette Road, Hampton, New Hampshire, 03842. Stephen's passing was extremely unexpected and our family was very low on emergency funds. If you would like to donate something towards the family please follow the link below. On behalf of our family, we would like to express our sincerest gratitude to everyone who has been supportive towards our family during this very devastating time. GOFUND ME CAMPAIGN https://www.gofundme.com/in-memory-of-stephen-hansen

Stephen C. Hansen, 22 years old, of Seabrook, suddenly and tragically passed away in a horrible car accident on Saturday evening, July 28th, 2018. Stephen was born on February 14, 1996 in Boston, MA, the son of Meredith Hansen and the late... View Obituary & Service Information

The family of Stephen C. Hansen created this Life Tributes page to make it easy to share your memories.

Send flowers to the Hansen family.