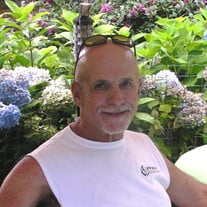 Rye – Steve Heguy, 71, of Rye, died suddenly on Wednesday, December 9, 2015, doing what he loved, riding his bicycle. He was born October 5, 1944 in Louhossoa, France, the son of the late Jean Baptiste and Marianne (Hiriart) Heguy. Steve was raised in France. His family moved to California when he was 18 years old and when he was 21; he enlisted in the United States Air Force. Steve was then assigned to Pease AFB in Portsmouth and in 1965, shortly after his arrival, he met and fell in love with Lucille “Lucy” Dumont of Rye. They were married in 1968 and settled in Kittery for a few years before buying their home in Rye. He entered the Portsmouth Naval Shipyard through the Apprenticeship Program and began his career as a Pipefitter. At the time of his retirement from the Shipyard in 1999, he was an Engineering Technician in the Engineering & Planning Department. After his retirement, Steve did not stand by idle, rather he worked several part time jobs, jobs where he could meet the public and interact, which he thoroughly enjoyed. Steve loved the outdoors and during the summer worked part time at Abenaqui Country Club manicuring their fairways. A special thank you goes out to Pat Kelly and all those on the ground crew who were not only co-workers but friends. Steve was a member of The American Legion Post #35 In addition to his beloved wife, Lucy, he leaves his brother, Rene Heguy and his wife Elizabeth “Bunnie” of Los Banos, CA; his sisters, Monique Lynch and her husband John of Klamath Falls, CA and Louisette Cavallo of Bordeaux, France: sister-in-law, Rose Corliss of Kittery, ME; brother-in-law, Joseph Boucher of OR, a special uncle and aunt in France; as well as several cousins, nieces and nephews. Visiting hours will be from 2 to 4 pm on Tuesday, December 15, 2015 in the Remick & Gendron Funeral Home - Crematory, 811 Lafayette Rd., Hampton. A Mass of Christian Burial will be celebrated at 10 am on Wednesday at the St. Theresa Parish Church, 815 Central Rd., Rye. Relatives and friends are respectfully invited. Burial will be private in the New Hampshire State Veterans Cemetery, Boscawen. In lieu of flowers, memorial donations may be made to the New Hampshire S.P.C.A. PO Box 196, Stratham, NH 03885, online at www.nhspca.org/ or to the Cocheco Valley Humane Society, 262 County Farm Rd., Dover, NH 03820, online at www.cvhsonline.org/makeadonation.cfm.

Rye &#8211; Steve Heguy, 71, of Rye, died suddenly on Wednesday, December 9, 2015, doing what he loved, riding his bicycle. He was born October 5, 1944 in Louhossoa, France, the son of the late Jean Baptiste and Marianne (Hiriart) Heguy. Steve... View Obituary & Service Information

The family of Steve Heguy created this Life Tributes page to make it easy to share your memories.

Send flowers to the Heguy family.