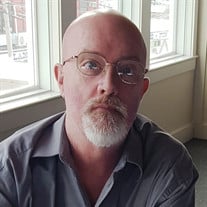 Rochester- Steven Francis Sarson, 57, of Rochester and formally of Hampton, passed away peacefully on Sunday, January 27, 2019 after a brief illness. He was born October 25, 1961 at the Air Force Hospital in Molesworth, England while his father was assigned with the United States Air Force at RAF Chelveston. He was a son of the late Dennis J. and Joan D. (Jerome) Sarson. The family moved to North Hampton in 1965 and he attended Sacred Heart School and graduated from Winnacunnet high with Class of 1979. Steven enlisted in the United States Army shortly after graduation and was assigned to an outfit in Germany. He returned home and worked for the former Digital Equipment Corporation, Compaq and Hewlett- Packard. He was also the racing director at Yankee Greyhound in Seabrook for a brief time. Steven was a quiet, hard-working man and a loyal friend. He loved shooting darts and was a Double “A” Shooter and had served as President of the Seacoast Dart Association. He is survived by his son Cameron Sarson of Dover, his daughters; Nicole Sarson of Rumford, ME and Becka Sarson of Florida, his siblings; Patrick Sarson and his wife Carole of Sanford, ME, David Sarson of Rochester, Donna Malcolm and her husband, Scott of Hampton, Lynn Pittendreigh and her husband, Mark of Exeter and Mari-Kate Pender and her husband, Joseph of Hampton. Steven also leaves his Aunt Loretta Garneau and her husband, Louis of Methuen, MA and many nieces, nephews and cousins. In addition to his parents, he was predeceased by his brother Frederick Sarson in 2016. Visiting hours will be from 5 to 8 PM on Monday, February 4, 2019 in the Remick & Gendron Funeral Home-Crematory, 811 Lafayette Road, Hampton. A Prayer Service will be held at 11 AM on Tuesday in the funeral home. Burial will be private. In lieu of flowers, memorial donations may be made to the Jimmy Fund at Dana-Farber Cancer Institute[www.jimmyfund.org/ways-to-give/] ,P.O. Box 849168, Boston, MA 02284-9168.

Rochester- Steven Francis Sarson, 57, of Rochester and formally of Hampton, passed away peacefully on Sunday, January 27, 2019 after a brief illness. He was born October 25, 1961 at the Air Force Hospital in Molesworth, England while his father... View Obituary & Service Information

The family of Steven F. Sarson created this Life Tributes page to make it easy to share your memories.

Send flowers to the Sarson family.