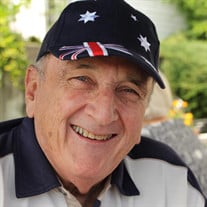 Hampton - Stuart John Fanning passed away at his home on October 3, 2021 from pulmonary fibrosis. Stu was born in Lawrence, MA on February 22, 1943. He grew up in Melrose, MA spending summers at the Greenlands in Hampton, NH. After graduating from Melrose High, Stu went to Monmouth College in Illinois where he met his future wife, who was attracted to him in large measure because of his great sense of humor. After graduation, he attended the University of Illinois for a year. In 1965, Stu and Priscilla were married in River Forest, Illinois. They moved to Michigan where Stu was in a management training program with Montgomery Ward. However, the military called, and Stu entered the Air Force becoming an Administrative Officer. He was stationed at Wright-Patterson, Nakhon Phanom, Hanscom, and finally Fuchu. After his time in the military and the birth of two daughters, Judith and Debora, the family settled in Rochester, NH. Stu was the business manager at the Strafford Guidance Center and later became a real estate broker. Stu held various offices in the First United Methodist Church in Rochester. In 1995, after the passing of his mother, Stu and Priscilla moved to the family home at the Greenlands to manage the summer cottage community there. They became involved in the Hampton United Methodist Church. Stu was a part of the Church Improvement Association (CIA) on Friday mornings -- a group that helped with extra cleaning and fixing at the church. He was a Trustee and also a counter for the Finance Committee. Stu was a "paper pusher" as an administrative officer in the Air Force and as a real estate broker, but he was equally at home with wrenches and screw drivers -- fixing water pipes and other things -- a talent he received from his grandfather. He enjoyed using this talent to help others and often asked for a list of jobs to do when visiting his daughters in their homes. Stu enjoyed traveling, especially road trips without planned reservations. He traveled to Hong Kong and Korea while living in Japan, and then later to Scandinavia, Guam, Australia (4 times), Iceland, and eventually had visited all 50 states. Seeing odd or very large things was great fun and became a goal for trips. In Casey, Illinois, the world's largest Rocking Chair can be seen along with a two story mailbox and a people sized bird cage. The world's largest porch swing is in Hebron, Nebraska, and a huge Chest of Drawers...or Bureau of Information...is in High Point, North Carolina. Stu loved cats. It started when his Aunt Mabel gave him a cat, but since Hazel, Stu's mother, was afraid of cats, his new pet had to live with Aunt Mabel. As an adult, Stu had his own cats...shared with his wife and children. His daughter Debbie will always remember when he surprised his family by approving an expensive surgical procedure on Pooka, an elderly cat, who had wandered into their lives just a few years earlier. The few, but happy, additional years with Pooka were wonderful. It eventually became easier to travel without having to arrange for cat sitters at home, so then Stu simply visited Debbie's cats. More recently, Debbie brought them over to visit Stu. Stu was predeceased by his parents, Albert Daniel Fanning (1969) and Hazel Pilkington Fanning (1995), and his older brother, Donald Pilkington Fanning (2016). Stu leaves his wife of 56 years, Priscilla Bussert Fanning, daughters Judith P. Fanning of Epping, NH and Debora A. Boyle (Gary) of Hampton, NH, and grandsons, Tyler Cline of Gainesville, Florida, and Zachary Cline of Epping, NH. A gathering will be planned for the summer of 2022 at the Greenlands. Donations can be made in Stu's memory to MRFRS - The Merrimack River Feline Rescue Society 63 Elm Street, Salisbury, MA 01952 Please put Stu Fanning in the "in memory" box (available only on desktop site). Acknowledgements will be sent to the family.

Hampton - Stuart John Fanning passed away at his home on October 3, 2021 from pulmonary fibrosis. Stu was born in Lawrence, MA on February 22, 1943. He grew up in Melrose, MA spending summers at the Greenlands in Hampton, NH. After graduating... View Obituary & Service Information

The family of Stuart John Fanning created this Life Tributes page to make it easy to share your memories.

Hampton - Stuart John Fanning passed away at his home on October...

Send flowers to the Fanning family.