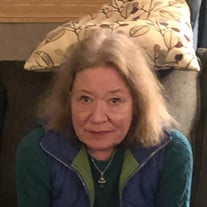 Rye – Susan G. Clayton, 70, of Rye, former longtime resident of East Baldwin, ME, died peacefully on Sunday, January 3, 2021. She was born in Lawrence, MA on March 22, 1950 a daughter of the late Richard S. Andrews and Patricia (Stevens) Shugrue. Raised in Windham, she graduated from Pinkerton Academy with the Class of 1968. Susan loved all animals, especially Golden Retrievers, which she bred for many years. She also enjoyed horses and the outdoors. She was a member of the American Kennel Club and Yankee Golden Retriever Club. Surviving family members include her significant other, Robert Bishop of East Baldwin, ME; children, RJ Clayton and his wife Kelly of York, ME, Jarod Clayton and his wife Nicole of Rye and their father Michael P. Clayton of Derry, NH; sister, Lynn Antonelli and her husband Joe of Plains, PA; grandchildren, Liam, Grace, Declan, Austin and Brooks Clayton; several nieces, nephews and her dogs, Mick and Brookie. In addition to her parents, she was predeceased by her sisters, Justine Smith and Holly Dungey. All services will be private. In lieu of flowers, donations may be made to the Golden Retriever Foundation , PO Box 952732, St. Louis, Missouri 63195-2732.

The family of Susan G. Clayton created this Life Tributes page to make it easy to share your memories.

Send flowers to the Clayton family.