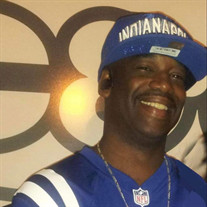 Seabrook - Terry L. Rhoades, 49, of Seabrook, formerly of Indianapolis Indiana, passed away unexpectedly on Friday, December 24, 2021. He was born on July 13, 1972 a son of Helen (Hughes) Rhoades and the late Gurnell Rhoades. Terry was born and raised in Indianapolis Indiana where he lived most of his life until he met his wife at which time he moved to New Hampshire, where he has spent the last 11 years with his family. Terry had many passions including history, architecture, survival prepping, comic books and video games. His biggest passion was spending time with his family near and far, he loved them all very much. He enjoyed going on adventures with his grandchildren, taking bike rides along the ocean front, trips to the beach and the White Mountains to his favorite view of Mt Washington. He would often be found outside grilling "Terry's famous ribs" from "Terry's Rib Shack" as he would call it. Terry had a kind heart and an infectious laugh. Once you heard it you couldn't help but laugh along with him. He was always up for anything to make those around him happy. He is very loved and will be greatly missed by all who knew him. In addition to his mother Helen, he leaves behind his loving wife, Debbie Rhoades of Seabrook, NH; children, Terry Lamont and Alecica Bishop both of Indianapolis, IN and Heleena Rhoades of Muncie, IN; stepdaughters, Britney Bishop of Indianapolis, IN and Miryah Eaton of Seabrook, NH; sisters, Karen Ellison of California, Tammie Gray, Carmen Willis, Cathy Rhoades, Tomika McMullen all of Indianapolis, IN; grandchildren, Yoryi, Keiyani, Keimyah Mejia all of Seabrook NH, Jayleigh DiTucci of Gilmanton, NH, Jason DiTucci Jr. of Kensington, NH, James DiTucci of Concord, NH and many nieces, nephews, cousins, aunts and uncles. In addition to his father Gurnell, he was predeceased by his brothers, Michael and Johnny Rhoades and stepdaughter, Tashia DiTucci. Services will be held from 1 to 3 PM on Saturday, January 8, 2021 at the Faith Tabernacle Church, 5210 North Michigan Road, Indianapolis, IN 46228. Itinerary as follows: Prayer by Sister Alexander, solo by Carol Hicks, eulogy by Sister Jackee. A celebration of life will celebrated at a later date for family and friends in NH.

Seabrook - Terry L. Rhoades, 49, of Seabrook, formerly of Indianapolis Indiana, passed away unexpectedly on Friday, December 24, 2021. He was born on July 13, 1972 a son of Helen (Hughes) Rhoades and the late Gurnell Rhoades. Terry was born... View Obituary & Service Information

The family of Terry L. Rhoades created this Life Tributes page to make it easy to share your memories.

Send flowers to the Rhoades family.