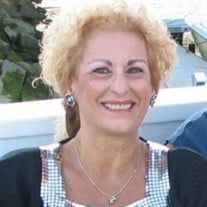 Exeter – Thelma R. Cangiamila, 75, of Exeter, formerly of Medford, MA died peacefully Saturday, October 17, 2015 at Exeter Hospital. She was born in Medford, MA August 25, 1940 the daughter of the late Carmen M. and Rose (Palumbo) DeStasio. Raised in Medford, MA she graduated from Medford High School with the Class of 1958. Thelma worked for 18 years at Anheuser-Bush. Not long after retiring, she went back to work for several years for Doctor Black in Beverly, MA. She was a generous, exquisitely beautiful, hospitable, giving woman who made everyone feel at home. Family meant the world to her, especially her grandchildren. She enjoyed cooking and hosting family dinners, where she always had the most stunning table settings. She had a big heart and will truly be missed by all who knew her. Family members include the love of her life and husband of 54 years; Vincent T. Cangiamila of Exeter; her son Thomas Cangiamila-Gaige of Tampa, FL; daughters, Cynthia A. Cangiamila of North Hampton, Cheryl M. Cangiamila-Cawley and her husband Patrick of Hampton; grandchildren, Christina Rosemary and Thomas Vincent Cawley; sister in law Angie DeStasio; niece Sharon Lucci and her son Michael of Merrimack; best friend Anne Ricciardelli of Malden, MA and her loyal dogs, Sabastian and Max. In addition to her parents she was predeceased by her brother Michael T. DeStasio, her son in law Bradford Gaige and her nephew Richard Lucci. A visiting hour will be held from 11 AM -12 PM on Wednesday, October 21, 2015 at St. Michael Parish, 9 Lincoln Street Exeter, NH 03833. A funeral mass will immediately follow at 12 PM. Relatives and friends are respectfully invited. Burial will be private. In lieu of flowers the family suggests donations in Thelma’s name to the American Cancer Society, P.O. Box 22718, Oklahoma City, OK 73123.

The family of Thelma R Cangiamila created this Life Tributes page to make it easy to share your memories.

Send flowers to the Cangiamila family.