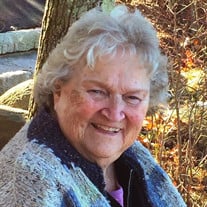 Hampton – Thelma M. (Inglis) Pretty-Brown, 84, of Hampton and a former long-time resident of Hampton Falls, passed away peacefully at her home on Sunday, June 10, 2018 surrounded by her loving family. Thelma was born in West Hanover, MA on October 19, 1933, a daughter of the late Ralph W. and Elsie R. (VanHorne) Inglis. The Inglis moved to the seacoast when Thelma was two years old and eventually settled in Hampton Falls. Thelma graduated from Hampton Academy with the Class of 1951. She married the love of her life, the late Alfred Graham Pretty in 1962 and she and Graham raised their family in Hampton Falls. In addition to taking care of her family, Thelma owned and operated New England Village Cabins, Village Ceramics and the Village Olde & New Shop, all of Hampton Falls. She was also an active member of the Tide Mill Chapter, Order of the Eastern Star #22 and the Winnicummet Lodge of Rebekahs #20. Surviving family members include her daughters, Marjorie South and her husband, Chad of Brentwood, Elizabeth Kasprzyk and her husband, Peter of Wakefield, Jan Pretty of Hampton Falls and Lisa (Marston) Cole of Hampton, her sons, Tim Marston and his wife Melissa of Hampton and William Pretty and his wife, Shirley of Lakeland, FL and her 15 grandchildren and 22 great grandchildren. She also leaves her brother Harold Inglis of Dover and many nieces and nephews. In addition to her parents and her first husband, Graham, Thelma was predeceased by her husband, Donald H. Brown who died in 2010, her granddaughter, Kelly Marston, her sisters, Arlene Blaisdell and Ruth Chambers and her brothers, Ralph Inglis Jr. and Robert Inglis. Family and friends may visit from 2 to 4 PM on Wednesday, June 13, 2018 at the Hampton Falls First Baptist Church, 3 Lincoln Ave., Hampton Falls. Services will follow the visitation starting at 4 PM in the church. Burial will follow in West View Cemetery, Hampton Falls. Family flowers only please but if desired, donations may be made to cancer research and national suicide prevention.

Hampton &#8211; Thelma M. (Inglis) Pretty-Brown, 84, of Hampton and a former long-time resident of Hampton Falls, passed away peacefully at her home on Sunday, June 10, 2018 surrounded by her loving family. Thelma was born in West Hanover,... View Obituary & Service Information

The family of Thelma M. Pretty-Brown created this Life Tributes page to make it easy to share your memories.

Send flowers to the Pretty-Brown family.