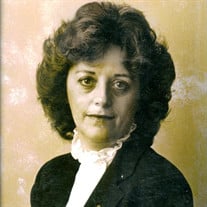 Hampton – Theresa Celia Perry, 74, of Hampton, passed away peacefully on Thursday, February 25, 2021 at the Exeter Hospital after an extended illness. She was born on August 30, 1946 in New Bedford, MA, a daughter of the late Francis and Rita (Sampson) Holland. She shared nearly 56 years of marriage with her beloved husband, Carl A. Perry. Terri was raised and educated in New Bedford and graduated from New Bedford High with the Class of 1964. While in high school, Terri met Carl Perry, the love of her life, and they married in 1965. After a brief time in Auburn, ME, the young couple settled in Hampton to raise their family. While in Hampton, Terri worked as a bookkeeper for Hampton National Bank, then as controller for Seabrook National Bank. Next, she took a position as controller for Commonwealth National Bank before being hired as the treasurer for Boston Bank of Commerce, a position she held until becoming ill. Theresa was a member of the Hampton Area Lion’s Club for many years and was the recipient of the Melvin Jones Fellowship Award, one of the organization’s highest awards. She was also very active in her church, Our Lady of the Miraculous Medal Church of Hampton. A loving and caring person, Theresa was always there for others less fortunate. She was an all-around nice lady who loved her family. She will be sadly missed. In addition to Carl, her devoted husband, she leaves her daughter, Lisa Sarcia and her fiancé David Montanus of Atkinson, her son, Curt Perry of Milton and her grandchildren, Amanda, Taylor, Nicole and Alexis Perry, Joshua Hicks and Jennifer Fetzner. She also leaves her great grandchildren, Kaden, Hunter, Emma, Brooklynn, Ryleigh, Owen, Lilly and Kendrick, her brother, Wayne Holland of Fairhaven, MA and her sisters, Jean Lenling of Acushnet, MA and Frances Fernandes and her husband Al of Port St. Lucie, FL. A Mass of Christian Burial will be celebrated at 11 AM on Tuesday, March 2, 2021 at Our Lady of the Miraculous Medal Church, 289 Lafayette Road, Hampton. Burial will be private. Masks are required and social distancing must be maintained. The Mass is also available for live-stream viewing at the OLMM website Memorial donations may be made to the Hampton Area Lion’s Club, PO Box 1088, Hampton, NH 03843.

Hampton &#8211; Theresa Celia Perry, 74, of Hampton, passed away peacefully on Thursday, February 25, 2021 at the Exeter Hospital after an extended illness. She was born on August 30, 1946 in New Bedford, MA, a daughter of the late Francis and... View Obituary & Service Information

The family of Theresa C. Perry created this Life Tributes page to make it easy to share your memories.

Send flowers to the Perry family.