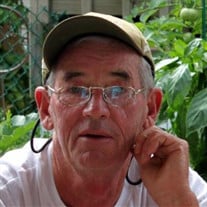 Salisbury -Thomas M. Aham, 76, of Salisbury, died Saturday June 8th, 2019 at Anna Jaques Hospital in Newburyport. He was born in Haverhill, MA, February 10, 1943 the son of the late Walter F. and Marcella (McMahon) Aham. Mr. Aham joined the United States Navy October 11th 1960 and served aboard the USS Oglethorpe and was honorably discharged after 4 years of service on January 13th 1964. He then worked as a licensed union master electrician as part of the I.B.E.W. Local 103 from which he retired. Tom always put his family and friends first and enjoyed entertaining them at his home in Salisbury. He reveled in landscaping, feeding the birds, squirrels and chipmunks. Earlier in his life he enjoyed playing baseball, softball and watching his boys play ice hockey. He was a standing member of the Newburyport Elks B.P.O.E. 909 and Seabrook American Legion Post 70 where he had many friends that enjoyed his company and harassing humor. He shared 46 years of marriage with his late wife Judy (Bartlett) Aham and spent the last 6 years with his fiancé Jayne Dobbins of Seabrook NH. Family members include two sons, Tom Aham and his wife Penny of Salisbury, Michael Aham and his wife Kathy of Seabrook, six grandchildren, Cody Aham of Salisbury, Calvin Aham of Burlington VT and Rylee Aham of Seabrook, Rachel, Marissa and Patrick Dugan, his sister Patricia (Aham) Lincoln and along with several nieces, nephews and dear friends Mark Sielicki, Sue Johnson, Mathew Knapp, Chip Hunt, John and Marilynn Eaton. He was predeceased by his brothers Peter and Bryan Aham. A celebration of life will be held from 1-6 P.M. Saturday, June 22, 2019 at his son's home, 66 Locust Street, Salisbury, MA. Relatives and friends are respectfully invited.

The family of Thomas M. Aham created this Life Tributes page to make it easy to share your memories.

Send flowers to the Aham family.