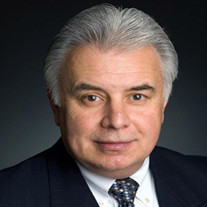 Hampton, NH - Thomas Alfred “Tom” Barnes, 68, of Hampton, passed away suddenly on Wednesday, June 7, 2017. He was born in Medford, MA on September 22, 1948, a son of the late Charles and Ruth (Perigard) Barnes. Tom was a graduate of Saint Clement High School in Medford, MA. After honorably serving his country in the United States Navy, Tom earned his Bachelor’s Degree from Boston State College in 1979 and in 1988, Tom received his Diploma of Graduation from Stonier Graduate School of Banking. He was also a graduate of the U.S. Department of the Treasury Leadership Program. He began his career as a bank examiner with the Massachusetts Banking Department and subsequently served as the treasurer of a mutual savings bank in Portsmouth, NH. Tom then served as a regulator and eventual Deputy Director with the U.S. Treasury Department, Office of Thrift Supervision (OTS) from 1989 to its’ sunset in July 2011, where he was responsible for examinations, supervisions, and consumer protection. Tom has been a speaker and panelist at numerous banking and thrift forums, taught as an adjunct instructor at the University of New Hampshire and served on the board of incorporation of a local hospital. After retirement from OTS, Tom served as Interim President and Chief Executive Officer to both The Cooperative Bank in Roslindale, MA and the National Capital Bank in Washington, DC and was later elected to Chairman of the Board of Directors for both banks. Proudly, Tom was also an active and dedicated lifetime member of the Ice Cream Club in Cape Coral, FL. He was a rare person who combined his intelligence, compassion, and humor to get problems solved. He had respect of, and for, all his colleagues and the love of, and for, his family and friends. He will be deeply missed by all who crossed his path. Tom was a loving and devoted husband and father to wife Marianne E. (Lombardo) Barnes, daughter Regina Mary Barnes, son Michael Thomas Barnes and daughter-in-law Michelle (Lacroix) Barnes. In addition to his parents, Tom was predeceased by his brother Stephen Barnes. Visitation will be from 5 to 8 PM on Tuesday, June 13, 2016 in the Remick & Gendron Funeral Home – Crematory, 811 Lafayette Rd., Hampton. A Mass of Christian Burial will be celebrated on Wednesday at 11 AM at Our Lady of the Miraculous Medal, 289 Lafayette Rd., Hampton. Family, friends and associates are respectfully invited.

The family of Thomas A. Barnes created this Life Tributes page to make it easy to share your memories.

Send flowers to the Barnes family.