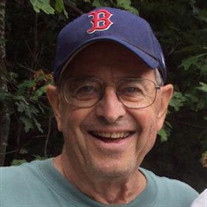 Newburyport, MA - Thomas F. Champion Sr. of Newburyport, 82, died peacefully in his sleep early Tuesday morning, August 21st. He was a 25-year lymphoma survivor, and was appreciative of the care he received over the years at Dana-Farber Cancer Institute. Tom was born in Swampscott, Mass., on January 2, 1936, son of the late Frederick R. and Margaret (LaForce) Champion. He was a graduate of Swampscott High and Northeastern University, and earned his MBA at the University of Massachusetts in 1959. He was a sharpshooter on the Pistol Team for the Swampscott Auxiliary Police for several years, and served in the Naval Air Reserve as a member of the ground crew for his older brother Donald’s fighter jet squadron. Tom’s professional career included positions at State Street Bank, ConductorLab, Transitron, Sanders Associates, Amicon, United Shoe, Gordon-Conwell Theological Seminary, the Archdiocese of Boston, and Haverhill-Newburyport Human Services, as well as owning and operating Browne & Son Signs of Newbury during the 1970s. In his later years he enjoyed teaching Labor Relations and other business courses at Bradford College, Northern Essex Community College, and Salem State University. Tom and his wife of 56 years, Hildegarde (Kempter) were married in 1962 in Brooklyn, NY, and raised four children in Newburyport: Elizabeth Champion (Edward) Daly of South Cairo, NY, Christa Champion (Nancy Boutilier) of Maynard, Tom Champion, Jr. (Patty Faass) of Amesbury, and Joanna Champion (Marty) Sailus of Newark Valley, NY. Tom was the beloved grandfather of eight grandchildren: Sarah, Katy, and Julia Daly; Savannah, Sam, and Jack Champion; and Owen and Anna Sailus. He was predeceased by his parents, his older brothers Donald and Gene, brothers-in-law Chuck Fisher and Peter Price, Sr., and his son-in-law Ed Daly. In addition to his immediate family, he is survived by his sister Barbara, sisters-in-law Dorothy Champion, Marion Champion, and Mary Ann Price, many nieces and nephews, and a large circle of extended family, chosen family, and friends. In 1999, Tom & Hilde purchased a motor home to fulfill his lifelong dream to travel the country. They soon discovered the beauty and simplicity of the Florida Keys, and for the next 17 years, spent an increasingly large part of each winter camping at Big Pine Key Fishing Lodge, cradled in community. Tom loved to travel to new places, meet new people, make new friends, and tell old stories. He was an excellent dancer, loved to tinker and fix things, could find a purposeful use for just about anything, and was an incurable collector of old junk that he called “good stuff.” Please join us in celebrating Tom’s life in a memorial service at 11:00 am Saturday August 25th, to be held at All Saints, 67 Friend Street in Amesbury.

Newburyport, MA - Thomas F. Champion Sr. of Newburyport, 82, died peacefully in his sleep early Tuesday morning, August 21st. He was a 25-year lymphoma survivor, and was appreciative of the care he received over the years at Dana-Farber Cancer... View Obituary & Service Information

The family of Thomas F. Champion created this Life Tributes page to make it easy to share your memories.

Send flowers to the Champion family.