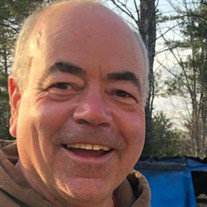 Epping – Thomas Robert DeFreze, 60, of Epping and a former longtime resident of Hampton, passed away at his home on Saturday, May 15, 2021. Tom was born in Exeter on February 2, 1961, a son of Frank DeFreze, Sr. of Hampton and Jeanne (Lizotte) Chase of Greenland. Tom grew up in Hampton and graduated from Winnacunnet High with the Class of 1979. Upon graduation, he began his career as a heavy equipment operator with R.S. Audley Construction of Bow. After 15 years with Audley he moved over to Severino Trucking of Candia for the next 20+ years before becoming ill. He was always a hard-working man and loved his job. Tom was a good-natured soul, liked by all who met him, especially the many construction crews he worked with over the years. He enjoyed riding KTM dirt bikes and often participated in his racing club’s endure competitions. Tom also loved to put on clambakes for his friends and family and was a member of the Hampton River Boat Club many years. In addition to his mother and father, family members include his brothers, Frank DeFreze, Jr. and his wife, Mary of Hampton and Joseph DeFreze of Greenland and his stepmother Mary DeFreze of Hampton. He is also survived by his stepbrother, Ronald Tatro of Salisbury, MA, his stepsisters, Cynthia Hall of Newfields and Bonny Dash of Rumford, ME and his niece and nephews: Kaitlin Hall and Kyle, Cody, Ryan and Zac DeFreze. Visitation is from 5 to 7 PM on Monday, May 24, 2021 in the Remick & Gendron Funeral Home – Crematory, 811 Lafayette Rd., Hampton. Services will be held on Tuesday at 11 AM in the funeral home with burial to follow in the High Street Cemetery. Social distancing should be maintained and masks are required for unvaccinated individuals. If desired, memorial donations may be made to the American Stroke Association

Epping &#8211; Thomas Robert DeFreze, 60, of Epping and a former longtime resident of Hampton, passed away at his home on Saturday, May 15, 2021. Tom was born in Exeter on February 2, 1961, a son of Frank DeFreze, Sr. of Hampton and Jeanne (Lizotte)... View Obituary & Service Information

The family of Thomas Robert DeFreze created this Life Tributes page to make it easy to share your memories.

Epping – Thomas Robert DeFreze, 60, of Epping and a former longtime...

Send flowers to the DeFreze family.