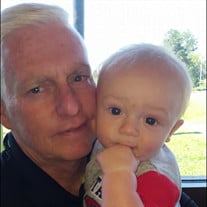 Saraland, AL - Tom Dolan, 62, of Saraland, Alabama was taken to his eternal home on November 8, 2019. Tom was born December 18, 1956 in Holden, Massachusetts to the late William V. Dolan Jr. and Jacquelyn (Whitcomb) Dolan. One of 10 children, he grew up surrounded by siblings and friends in Worcester, MA. In the early 1980’s, Tom had a stint as a professional race car driver in the Barber-Saab Pro Series and won several races. He was a lifelong avid motorsports fan including F1, IndyCar, and NASCAR. His love of cars motivated him to earn an AA degree with a concentration in automotive technology. In 1984, he received a bachelor’s degree in Mechanical Engineering from Northeastern University, followed by a highly successful career. Initially he worked for the US Navy overseeing submarine upgrades and repair operations. He then transitioned into the private sector and worked for over twenty years in the nuclear power industry. Upon retiring from St. Lucie Nuclear Plant, he was recruited to return to the industry as a consultant during which time he worked at nuclear power facilities in Pennsylvania, Louisiana, and New Jersey. The light and love of his life was his family; his loving wife of 30 years, Monique, daughters, Taylor and Mackenzie, son-in-law, Brett, grandson, Bryce, his source of pure joy, and beloved family dog, Whitney. He was also excited for the arrival of his second grandson. Some of his favorite family activities included boating, traveling, worshiping at Redemption Church, and attending his daughter’s soccer games. He was a lifelong New England Patriots fan and cheered them to victory at SuperBowl XLIX with dear friends. Tom is survived by brothers Garrett (Kathy), John (Debra), James (Som), and J. Michael; sisters Catherine (Jeff) Carlisle, Anne Dolan-Leonard, and Mary (Andrew) Sawyer; mother-in-law Paulette Girard; brother-in-laws Marc (Martha) Girard and Guy (Tammy) Girard; sister-in-laws Gisele (Robert) Leone, and Danielle (Jeff) McAuliffe; 33 nieces and nephews; aunts; and many great nieces, great nephews, and cousins. He is predeceased by brothers Paul and William, and father-in-law Albert Girard. A Mass of Christian Burial will be celebrated at 11 AM on Saturday, November 23, 2019 at Saint Elizabeth of Hungary Mission Church, 1 Lowell St., Seabrook Beach, NH. Internment will be in the Maple Lane Cemetery, Stratham, NH. Memorial donations in lieu of flowers may be made in Tom’s memory to the American Foundation for Suicide Prevention

Saraland, AL - Tom Dolan, 62, of Saraland, Alabama was taken to his eternal home on November 8, 2019. Tom was born December 18, 1956 in Holden, Massachusetts to the late William V. Dolan Jr. and Jacquelyn (Whitcomb) Dolan. One of 10 children,... View Obituary & Service Information

The family of Thomas A. Dolan created this Life Tributes page to make it easy to share your memories.