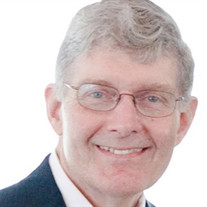 New Durham - Thomas L. Haggerty, Jr., of New Durham, formerly of North Hampton, died on Friday, January 20, 2017, at Wentworth-Douglass Hospital following a courageous battle with cancer. Tom was born in Amesbury, Mass. on June 17, 1941, the son of the late T. Leo and Irene Haggerty, residents of Hampton at the time. From his earliest school years until his marriage in 1971 to Emily Nichols -- the girl next door since 1968 -- he resided in Marblehead, Mass. They lived in Salem and Salisbury, Mass. before settling in North Hampton in 1979 and retiring to New Durham in 2001. Tom graduated from the University of New Hampshire in 1963 and received his Master’s Degree in Education from Cambridge College in 1993. Tom’s career as an English teacher began at the St. James School in Berlin, CT, followed by ten years at Newman Preparatory School in Boston, 25 years at Winnacunnet High School in Hampton, and finishing with additional terms at Traip Academy in Kittery. From 1985 to 1998 he was an active member and head usher at South Church in Portsmouth. Although considered retired, Tom spent the past 15 years working part-time at The Book Outlet in North Hampton. He also enjoyed gardening, tutoring, and writing; most recently for a local weekly, The Baysider. Tom’s legacy will be that of a cherished friend and colleague; beloved father, husband and uncle; and inspiring educator and mentor. He was an entertaining, witty, gentle, and generous man whose warmth and enthusiasm made those in his presence feel valued and respected. He is survived by his beloved wife Emily, and their daughter, Susanna, and her husband Robert Murphy of Mountville, PA. Tom also leaves his sister-in-law, brother-in-law and their spouses; many adored and adoring friends; and an extended family of treasured cousins, nieces, nephews, and their spouses and children. He was predeceased by his parents and his sister and brother-in-law, Nancy and Gilbert Dempsey. Visiting hours will be held on Friday, January 27, 2017 from 4 to 7 p.m. at the Remick and Gendron Funeral Home 811 Lafayette Rd., Hampton. A ‘Celebration of Life’ memorial service will be held Saturday, February 4, 2017 at 2 pm at South Church, 292 State Street, Portsmouth, NH. All are welcome. Memorial donations may be made to the charity of one’s choice or to any of the scholarships within the Winnacunnet Dollars for Scholars, Inc., P.O. Box 1593, North Hampton, NH 03862-1593. (Please note in the check memo that funds be directed to the Thomas L. Haggerty, Jr. Memorial Scholarship fund.)

The family of Thomas L. Haggerty, Jr. created this Life Tributes page to make it easy to share your memories.