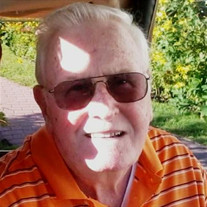 Greenland – Thomas J. Hamilton, Jr., 84, of Greenland, died Friday, July 26, 2019 at home surrounded by his loving family. He was born in Winchester, MA June 22, 1935 one of ten children to the late Thomas J. and Helen M. (Reardon) Hamilton. Tom “Red” graduated from Woburn High School, Woburn, MA with the Class of 1955. He worked for the local First National store for a brief time before enlisting in the US Marine Corps. He attended Marine sea school, served in Mediterranean Sea duty on the USS Northampton and specialized in firearms as a rifleman and an MP. From 1964-67, he worked as a milkman for Hood Dairy products where he met the love of his life Catherine A. Fawson on his daily milk route. After their marriage in 1965 they began raising their family in Woburn, MA. They recently celebrated 54 years of marriage. Tom’s longtime 25 year career was with Greyhound Bus Lines. He drove local routes from Boston to New York and many charter tours throughout New England, Canada, Florida and even California. He loved singing to his passengers to make the tours enjoyable and was even known as the singing bus driver. Tom loved people and enhanced his passenger bus trips with his fun-loving, warm personality. He loved to travel, especially to Ireland where he visited again and again to see relatives and friends. He closed more than a few pubs on the auld sod and by the end of the night had everyone singing with him. Retirement was not for Tom, so after leaving Greyhound in 1991 he and his wife obtained the franchise Colonial Coustic-Glo an acoustical ceiling tile cleaning service they operated for 10 years and for another 10 years he drove for Land Air Express. He finally retired after driving limousines for a brief time. In 1976, he made his home in Greenland and was active in the community as a participating and leading member of the Greenland Veterans Association, and a lifelong member of Portsmouth Elk Lodge #97, as well as coaching Little League and attending all his kids sports games.and being a role model and father figure to many Greenland kids. He was a competitive candlepin bowler and a former member and past president of the Towanda Club in Woburn, and organized many community fundraisers, be it hockey or golf tournaments. Tom was an avid New England sports fan, never missing an opportunity to watch regular season games on TV, no matter how late they went on into the night and celebrated his teams championships with family and friends. He was a passionate lifelong golfer with an enviable short game and a 35 year member of Portsmouth Country Club his favorite holes being 14 and 15. He loved nothing more than to play golf and tell stories. He was a master storyteller with a quick wit and made everyone he met feel at ease. If you met Tom Hamilton once, you remembered him. In addition to his wife Cathy he leaves four children, Dawn Hamilton of Greenland, Thomas Hamilton and his wife Tracy of Hampton, Jill Hamilton-Anderson, her husband Mark, and Todd Hamilton all of Greenland, four grandchildren, Halli, Kody, Brendin and Liam, his siblings, Helene McCarthy of Canton, MA, Robert Hamilton and his wife Susan, Maureen Hamilton all of Tampa, FL. Patrick Hamilton and his wife Andrea of Hudson, Mark Hamilton and his wife Karen of Londonderry, in addition to his beloved nieces and nephews. In addition to his parents he was predeceased by his siblings, Diane, Michael, and Irving Hamilton and Carolyn Nutile. Visiting hours will be from 1-3 P.M. and 5-7 P.M. Sunday August 4, 2019 at the Remick & Gendron Funeral Home-Crematory, 811 Lafayette Road, Hampton. A mass of Christian burial will be celebrated at 11 A.M. Monday, August 5, 2019 at St. Theresa Catholic Church 820 Central Rd, Rye Beach, NH 03871. Relatives and friends are cordially invited to pay their respects and after Mass to join the family to share memories and stories of Tom in a celebration of his life. In lieu of traditional remembrances donations may be made to the Greenland Veterans Association, Inc., c/o Scholarship Fund, P.O. Box 13, Greenland, NH 03840.

The family of Thomas J. Hamilton Jr. created this Life Tributes page to make it easy to share your memories.

Send flowers to the Hamilton family.