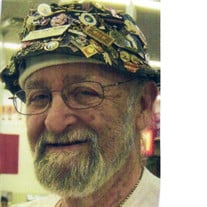 Seabrook, NH – Thomas R. “Doc” Robey, 79 of Seabrook, died peacefully on Wednesday, April 20, 2016 at Merrimack Valley Hospice House in Haverhill, MA. He was born in Lawrence, MA October 22, 1936 a son of the late Harold and Evelyn (Broadhurst) Robey Raised in Lawrence he graduated from Central Catholic High. Following graduation Thomas enlisted in the United States Air force and proudly served 4 tours in Vietnam and 5 years in Greece as a cryptologist. After his time in the service, Thomas returned home and worked for the United States Postal Service for various towns, retiring in 1992. Doc was a former member of the Methuen Knights of Columbus. He was an avid poker player who could often be seen at the Poker Room in Hampton Falls or the Seabrook Poker Room. Family members include his wife of 27 years Diane M. (Lavertue) Robey of Seabrook; children, Michelle Lawson and husband Doug of Arlington, MA, Raymond St. Jean and his wife Patricia of Wilmington, MA, Stephen St. Jean and his wife April of Manchester, Kurt St. Jean and his wife Barbara of Sandown and many grandchildren. The family would like to offer a special thanks to all the kind staff at both the Merrimack Valley Hospice House and Brigham Manor Nursing and Rehabilitation Center in Newburyport, MA for their great care of Doc. Visiting hours will be from 11 AM - 1 PM on Monday, April 25, 2016 in the Remick & Gendron Funeral Home-Crematory, 811 Lafayette Road, Hampton. A memorial service will immediately follow at 1 PM in the funeral home. Relatives and friends are respectfully invited. Burial will be private. In lieu of flowers, the family suggests donations to the American Cancer Society, P.O. Box 22478, Oklahoma City, OK 73123 or the American Heart Association, P.O. Box 417005, Boston, MA 02241.

The family of Thomas R. "Doc" Robey created this Life Tributes page to make it easy to share your memories.

Send flowers to the Robey family.