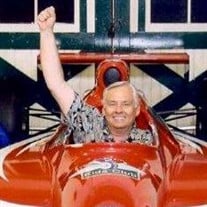 Hampton – Thomas D. Robichaud, III, 73, of Hampton, passed away on Friday, April 13, 2018 at Maine Medical Center after a period of declining health. Tom was born December 19, 1944 in Salem, MA, a son of the late Thomas D. and Marion (Stone) Robichaud. Raised in Salem and Georgetown, MA, Tom enlisted in the United States Air Force at 17 years old. The Air Force took Tom to South Dakota and upon leaving the service, he returned to MA for a brief time. Upon returning to South Dakota, he helped found the North Haines Volunteer Fire Dept., served as Chief of that Dept and was a proud member of the Volunteer Fire Service. He was hired as Pennington County Fire Coordinator and was devoted to the education and safety of his fellow firefighters. Tom met his soul mate and future wife, Val A. (Livingston) Robichaud while in South Dakota and the couple relocated to Hampton in 1990. Tom went to work for UFP Technologies of Newburyport, MA where he last held the position of Corporate Safety Officer. With over 30 years total with UFP, they were his 2nd family and he took his responsibilities seriously. Tom often said he only joined two things in his life, and was proud of both, the Air Force and the Fire Service. He believed in teamwork and strived to build strong teams wherever he worked throughout his life. He is survived by Val, his loving wife of over 37 years, his 4 children, Mark, Charity, Mercy and Paul, his 4 grandchildren, JoAna, Danielle, Cory and Jesse, 5 great grandchildren,Jennifer, Ryan, Adam, RayLynn,and Autumn, many nieces, nephews and great nieces and nephews. Visitation will be from 5 to 6 PM on Monday, April 23, 2018 in the Remick & Gendron Funeral Home – Crematory, 811 Lafayette Rd., Hampton followed at 6 PM by an hour of sharing memories of Tom's life. In true Tom fashion and in his memory, casual dress please, jeans and Hawaiian shirts would be appreciated. Burial with fire service and military honors will be in the Keystone Cemetery in South Dakota.

The family of Thomas D. Robichaud III created this Life Tributes page to make it easy to share your memories.

Send flowers to the Robichaud family.