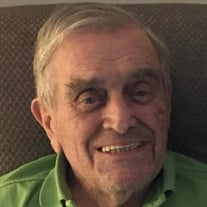 Rye - Thomas J. “Tom” Vaughan, of Rye, passed away peacefully at the age of 92, on November 4, 2020 after a long, full and happy life. Tom was born on September 30th, 1928 to Michael and Marie Vaughan in Somerville, MA. In 1946 he graduated from St John’s Cambridge. He was a WWII veteran, serving in the Army in post-war Japan. Tom was a graduate of the American Television Institute in electrical engineering and became a renowned expert in microwave systems and television transmission. He built his company, Micro Communications, Inc. in Manchester, NH. In 1994 he earned the prestigious Engineering Achievement Award from the National Association of Broadcasters. Tom also served on the Federal Communications Commission Advisory Board for high-definition television. In 1952, he and Elaine Jean Saltzman of Somerville, were wed. They raised three children: Deborah Vaughan-Gowen of Philadelphia, PA; Karen Vaughan of Manchester, NH; and Cheryl Vaughan Forster of Salt Lake City, UT. In 1979, he married Barbara Curtis of Haverhill, MA and Tom welcomed her daughter, Sharon (Curtis) Spaulding (David Smith) of Fresno, CA, into the family. After selling his business, he and Barbara traveled the world and split their time between Rye, NH and Naples, FL, golfing and hosting special family visits. Tom was pre-deceased by his parents, and his wife of 37 years Barbara (Curtis) of Rye, NH. Also deceased are Elaine, his first wife, his sister Mary Donovan of Waltham, MA; brothers John Vaughan of Newmarket, NH; George Vaughan of Louisville, KY; and sister Teressa Passinissi of Danvers, MA. Tom loved all of his blended family. He is survived by daughters Deborah, Karen, and Cheryl, and Sharon. He is also survived by three younger brothers; Francis (Terresa) Vaughan of Arlington MA; Joseph (Marlene) Vaughan of Twin Mountain, NH and Lawrence (Marilyn) Vaughan of Sun City Center, FL as well as his grandchildren Emily Gowen (Peter Erikson) of Philadelphia; Glen Forster of NYC; Weston Forster of Salt Lake City, Garth (Christina) Spaulding of San Francisco and Bree (Jonas) Wilber of Fresno as well as his five great grandchildren (Griffin, Londen, Brighton, Rowyn, and Lyra Bella) and many nieces and nephews and their loving families. In lieu of flowers, contributions to St. Jude Childrens Research Hospital , The American Heart Association or Habitat for Humanity would be appreciated.

The family of Thomas J. Vaughan created this Life Tributes page to make it easy to share your memories.

Send flowers to the Vaughan family.