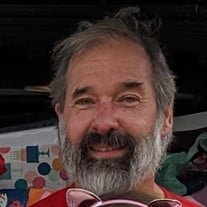 Hampton – Timothy E. Plouffe, 63, of Hampton, passed away at his home, surrounded by loving family, on Sunday, June 20, 2021, after a quiet but courageous battle with pancreatic cancer. Tim was born in Exeter, NH on July 14, 1957, a son of the late Eugene H. and Marion (Mahan) Plouffe. He shared 44 years of marriage with his high school sweetheart and loving wife, Suzanne “Sue” (Genest) Plouffe. Tim was a life-long resident of Hampton and graduated from Winnacunnet High with the Class of 1976. As long as anyone can remember, he had an interest in everything mechanical. He loved taking things apart and was helping repair lawnmowers with Mr. Towle on Mace Rd. before he was even a teenager. While in high school, Tim went on a work-study program to the former Scott Pontiac in Hampton and became the youngest Certified GM Mechanic in the state. After many years at Scotty’s, he went to work at Salisbury Auto Salvage for the next 20 years. Tim then moved on to North South Motor Cars in Seabrook where he was the General Manager and an integral part of every aspect in construction of the building. He was the Head Mechanic and right hand man of the business until he became ill. Throughout his life, Tim enjoyed helping others. He was an easygoing, extremely hard-working man and a fantastic provider for Sue and his girls. He loved going to car shows and was especially proud of his 1968 Chevelle SS that he restored. When he was younger, he enjoyed riding motorcycles and waterskiing. Above all else, Tim loved his family and times with them were his happiest moments. In addition to Sue, Tim leaves his daughters, Aimee Knowles of Hampton and Jennifer Hess and her husband, Justin, of Orland, ME and his grandchildren, Antoinette, Adrienne and Amelia. He is also survived by his brothers, Michael Plouffe and wife Sharron of Hampton and Danny Plouffe and wife, Lorna, of Hampton Falls. Visiting hours will be from 2 to 5 PM on Sunday, June 27, 2021 in the Remick & Gendron Funeral Home-Crematory, 811 Lafayette Rd., Hampton. A Mass of Christian Burial will be celebrated on Monday at 11 AM at Our Lady of the Miraculous Medal Church, 289 Lafayette Rd., Hampton. Burial will follow in the High Street Cemetery. In lieu of flowers, donations in his memory may be made to a children’s hospital of one’s choice.

The family of Timothy E. Plouffe created this Life Tributes page to make it easy to share your memories.

Send flowers to the Plouffe family.