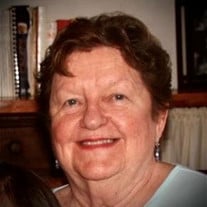 Dover – Venita Ann Brown, 83, of Dover and formerly of Portsmouth and Hampton, passed away peacefully on Sunday, January 12, 2020. Venita was born in Milford on August 13, 1936, a daughter of the late James and Katherine (O’Donnell) McCue. She was married to the late Warren T. Brown, Sr. for over 40 years until his passing in 1998. She was raised in Milton and moved to Portsmouth as a young girl. She was a graduate of Portsmouth High School and while in school, met Warren, the love of life. Warren joined the US Marine Corps and upon his return from Korea they were married. They settled in Exeter, spent time in Portsmouth, Danvers, MA and in the 1970s, moved to Hampton. Venita worked as an Assistant to the Town Clerk in Hampton and then worked as the Assistant Clerk of Court at the old courthouse until her retirement in 1996 with 22 years of service. Venita loved her family and were the most important part of her life. She especially enjoyed their times at the family cabin on Pawtuckaway Lake and formed many lasting and beautiful memories. She is survived by her sons; Warren Brown and his wife, Mary, of Haverhill, MA, Phillip Brown of Jacksonville, FL and Kenneth Brown and his wife, Lisa of Dover. She also leaves her brothers, James McCue of Portland, ME and John McCue of St. Cloud, MN and her grandchildren, Dylan, Andrew, Declan, Britain, Nick, Alexandra, Emily and Jaelyn. Visitation will be from 4 to 6 PM on Monday, January 20, 2020 in the Remick & Gendron Funeral Home – Crematory, 811 Lafayette Rd., Hampton. Services will immediately follow the visitation starting at 6 PM in the funeral home. If desired, memorial donations may be made to the American Diabetes Association.

The family of Venita Ann Brown created this Life Tributes page to make it easy to share your memories.

Dover – Venita Ann Brown, 83, of Dover and formerly of Portsmouth...